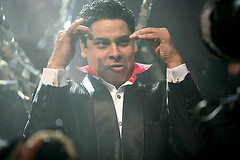 It tries to be a slapstick with a different kind of humor. And ends up being a different means to achieve the same end, like umpteen other slapstick - ridiculous yet unentertaining. Result - no laughs here either!

You see Boman Irani in the horrendous get-up and you know the next two hours aren't going to be very bright. But then again, you are an ardent movie buff, right? No wonder you are reading the review of a Hindi film called Fruit and Nut or, like in my case, at the threshold of a theater playing it. Thus you are here with a sliver of hope, a faith in Boman Irani and Diya Mirza's choice of scripts. HA HA! You have been made into a nut case and that's about the only laugh there is related to the film.

It can't be that bad, you think? Bald and wigged villain kidnaps beautiful damsel because he wants the map to a gutter underneath the state assembly building in Mumbai. Co-villain(?) joins in mid-way to achieve the same purpose, except that everyone changes their aims and objectives conveniently. Some because they are actually serving the purpose of protecting heritage against the big bad mall-ification of the city. Except that you are not interested a teeny-weeny bit.

It is a madcap storyline that slapstick lovers relish. The point, they say, is in the chaos where the aim is to make the impossible possible - believable or not is another story. You want madcap? You got MADCAP!! By the ton and more. Everything, every single micro-element of the film is filled with nonsense. Each character is a caricatured caricature. Each movement on screen is an attempt to make the audience laugh at some character or the others' misfortune. Which translates to 'Oh, so not funny'. And the quintessential loudness of the genre adds to the pandemonium.

There seems to be a satirical comment on the trends of urban life while also spoofing Hindi slapstick films. Only that can explain the above average absurdity and disconnect in the dialogues. Especially the lines given to Khandar (Mahesh Manjrekar). A lot of pun used but none with any connection to anything. Anyway in hindsight, it feels like a farfetched theory and me trying my best to find meaning in the chaos.

Anyway, though I understand this is not my kind of humor, I doubt it has anything for the genre-buffs either. When 100 minutes get a bit too much to stay put in the seat, you know all has gone wrong.