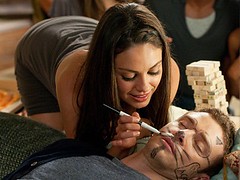 If you’re looking for a fun, steamy film that ultimately falls into the formulaic jungle of love and mush-popcorn, then Friends With Benefit is for you. It’s got a cracker of a beginning, with witty jibes at the whole process of love and relationships but fails as a film because ultimately it succumbs to the same clichés. Watch the film to drool over Mila Kunis and Justin Timberlake, though.

Natalie Portman and Mila Kunis both followed their performances in the challenging Black Swan with similarly themed rom-coms. Does Arrenofsky have an answer for that one? Or it is just the joy of being a part of light film? While No Strings Attached (released earlier in the year with Ashton Kutcher and Portman) was a poorly written film, Friends With Benefit is sharper and better performed. But is it different on any other account?

Friends With Benefit is an intelligent film. We are forced to ignore that the film falls prey to the same age-old stereotypes that it mocks all throughout the first half of the film – because the lead pair is just so .. pretty. The film revolves around two emotionally damaged/unavailable people – Jamie (Mila Kunis) who’s a placement agent and Dylan (Justin Timberlake) who becomes the art editor at GQ magazine through Jamie.

They agree that they don’t want relationships and realize that they’d be better off as friends who indulge in casual sex. Well, that’s a revelation. Because we really haven’t heard that one before. We are then taken through a good 45 mins of the yummy two in their bare essentials, getting frisky all over the place. Reason no 1 to like the film.

The first half is funny, smart and a total win because it makes you want to rethink when you were in such a situation and how that went horribly wrong (ouch). You wonder – if they’re having so much fun it must actually be a plausible alternate to the big L. They flip through corny rom-coms on TV and make fun of it, they mock their exes and most importantly they don’t cuddle, romance or get mushy. Reason no 2.

What we ignore to see (or are made to) is that Jamie is actually a die-hard romantic. She claims to genuinely believe in true love and a prince charming because of a troubled childhood. So while they go through their steamy sessions of casual-ness, and while a small part of you wants to freeze the near-perfect scenario, you know what’s in store during the next half of the film. Conflict arises, but of course.

It might not be the regular conflict, but its conflict enough to make the lead pair question their friendships. Yada yada, fights, tears, heavy background music later Friends With Benefit is the same film that Timberlake and Kunis make fun of in the first half. Clichés abound.

The real conflict is in your head. Do you like the film or do you not? It’s a good looking film, Friends With Benefit. Set in New York, it makes you want to move and live “the good life”. The background score has a pop music bounce to it – which in Timberlake’s words, “makes you believe you had a good time watching the film”. The pace of the film is crisp, so it doesn’t allow you to analyze whilst drooling over the lead pair.

It’s only after you leave that you realize the shortcomings of the film. Director Will Gluck admits to making a film that wouldn’t stand at PG 13, because “they (the lead pair) realize that they’re in a romantic comedy story — as two regular people who aren’t in a movie would comment on” and act accordingly. Hence the “reality” - casual sex, denial and conflict. But what about the clichéd, mushy end? Oh that’s just the Hollywood studio’s requirement, I hear.