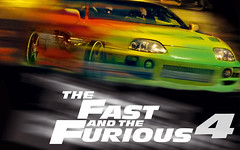 Lean Burn machines with gleaming bodywork coupled with some wanna be bad boys; this film fails to ignite the turbo charge.

This is a summer block buster; one of the many that Hollywood keeps dishing out in the fond hope that at least some if not one would set the cash registers ringing loudly. Having never seen any of the earlier films in the series, I looked forward to some hot road action and fisticuffs, but was tremendously disappointed. This film is downright lame; as a summer action block buster it has the required hot gals, automotive action, and studly heroes, but all of it combines in such a limp fashion, that it becomes a drag.

Of course, there are set piece action sequences; all but one have cars moving at hyper kinetic speeds. The film opens with one such set piece, which introduces the “cool” characters in the story. This sequence is very predictable and obvious in its outcome, and the CGI effects add nothing to it. When the film cuts from the CGI frame to the “real” one, the perspective changes in a very obvious manner, and the viewer immediately sees that “real” is much too slow. This kills whatever impact the sequence might have had. Action sequences are very hard to visualize and stage; they have to be created in such a manner that they look good on screen which is what really counts. This director badly needs some lessons, possibly he should take a tip or two from John Frankenheimer; take a look at that superbly executed car chase on narrow roads that Frankenheimer gave us in Ronin.

The other car chase sequences are set in tunnels and there is one on the city roads too. The tunnel sequences also suffer from the CGI syndrome. Yes, there is a lot of fast editing, rapid cuts to revving speedometers, and loud sounds, but it just gives you a big, bad, headache. The best sequence of the lot is the illegal race held on the city streets, simply because the CGI seems to have been kept to a minimum, and one gets a feel of the speed and the last minute near misses. There is wonder of wonders, a chase on foot too, but it is done in a very half hearted manner.

The director probably believed that he needed to keep things moving to engage the audience and not let them worry about the plot; so he keeps the story moving, keeps the camera moving, and keeps the cars moving too. This formula does not work when it comes to the “emotional / bonding” scenes between the characters. These scenes become so ponderous; thanks to the clichéd dialogue and wooden acting, that they just sink like lead weights.

Vin Diesel has as much acting ability as his pectorals, in fact they seem to speak for him most of the time. The rest of the cast is a motley mish mash of toned bodies wearing snazzy clothes, and as they have nothing much to do, they really do not matter. The villain of the piece looks like one of those stereotypical drug dealers that infest the streets of Los Angeles ( at least in Hollywood movies), all chains, rings, and flash. The bad boys really try hard to look bad, with buffed up bodies, tattoos, and obligatory snarls. The eye candy does not stay around long for one to have a really good lecherous look.

The whole movie looks and feels like it has been recycled from shows on TV; MTV Grind and other police serials immediately come to mind. The FBI Agents, the villains, the heroes, are all so obviously copies of copies, that one experiences a sensation equivalent to that of eating pureed cardboard, while watching the film. Watch this film if you feel like a pubescent lad or are one, the rest need to find better things to do on a hot summer day.

Dominic (Vin Diesel) teams up with a FBI agent to take revenge on a drug dealer.