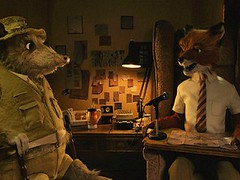 After entering animated worlds of fishes, monsters, ants, bugs and toys, here’s a charming stop motion feature film about foxes. Agreed they’re not exactly attractive creatures, but with voices of George Clooney, Meryl Streep, Owen Wilson, Bill Murray and Michael Gambon, this amusing tale is irresistible. At the awards, it was completely overshadowed by Up in 2009, but now that it’s available on DVD, you should certainly consider renting it for an entertaining evening with your family.

There are some years when certain gems remain hidden or underexposed because a far bigger gem steals the show completely. The year 2009 saw Disney Pixar’s Up do that to most other animation films, as it won all major awards. Fantastic Mr Fox was a victim. Since it did not receive a deserving theatrical release in India - distributors are very wary of stop-motion films, it appears - it can finally seek some redemption since it is available on DVD.

For those of you who’ve become habitual viewers of every single Pixar and Dreamworks product, Fantastic Mr Fox is a refreshing experience for a multitude of reasons. One, this animation film has been shot completely in stop motion. It gives the film a very hand-made, indie feel.

Clooney, the voice of Mr Fox is the film’s biggest plus - just listening to his voice elevates the film to a new level - he’s full of attitude, chutzpah and class that’s rare with voices that are trying too hard to emote in an animation film. It’s like watching an Ocean’s Eleven in animation, what with Mr Fox, a family man, newspaper columnist, keen to go back to his hunting ways as he plots the most famous chicken heist of all time. His wife, Mrs Fox (Streep) however doesn’t approve of this and the entire community of beavers, rabbits and other pests gets into trouble.

There’s a reason why it’s call Mister Fox and Clooney’s the man giving him a voice. The actor clearly represents the epitome of masculinity and the story essentially is about how men, once married have to hold the reins on their wild, hunting ways that they so enjoyed in their days of bachelorhood. So while chasing chickens and stealing them was fine once upon a time, the responsibility of being a family man must bring some control on such vicarious pleasures after having a son and a stable family life to support.

While it puts forward this argument, it also provides Mr Fox to speak his mind - men do want to be fantastic, awesome and simply the best, despite the boundaries that family life brings. Thankfully, the screenplay balances both sides of the argument well and celebrates every family member’s uniqueness. Even the little ones have their own qualities to bring forth in an hour of crisis. Ash (Schwartzmann) who is Fox’s son, for example is always keen to be productive and useful - he even wants to be with his father during the heist - but is not allowed to. He gets his chance to prove himself though.

The humour in the film is somewhat the cool types - it does not make you laugh out loud - but it does have a certain charm that is amusing to kids and adults alike. If you’ve seen director Wes Anderson’s earlier film, The Darjeeling Limited, you’ll know what I’m talking about.

You don’t quite begin to appreciate the film until you witness the meticulous amount of detailing that’s gone into converting this Roald Dahl story into a stop motion film. Which is where the extras on the DVD come as a big bonus. The film if you look at the bigger picture, is essentially a flip book format of over 60,000 still photographs shot using a Nikon camera, which gives it a very HD feel. The textures, colours and setting of the village is very similar to where Dahl lived himself and the actors recorded their voices in a real farm-house in the countryside and not in a studio, as is usually the case. So many miniatures, so much effort - the efforts seem mind boggling.

The stop motion is far better than Mel Gibson’s Chicken Run and although you might find it uncomfortable at the beginning, by the time Clooney’s voice plays tricks with your senses, you’ll forget what’s stop motion and what’s 3D animation.

Fantastic Mr Fox is recommended viewing with family, kids and friends. Try it on a weekend.