Nagraj Manjule's Fandry is a film to be proud of. Layered, nuanced and cleverly hidden away in a charming village setting is a scathing take on our tendency to divide ourselves into 'us' and 'them'. It is also a film about dreams, and about how everyone has a right to have them.

In a tiny, innocuous scene in Fandry, almost in the background, a school teacher begins explaining to his students the subtext in a poem by a Marathi saint. The poem's title, roughly translated, means, "All is not what it seems." Apart from the tale of innocent love and the wry look at caste divides in rural India that Fandry is, it is also a gentle reminder of how nothing that we see or hear can be taken at face value; because nothing, really, is what it seems.

Everyone in Fandry is chasing something. The dark-skinned son of the lone 'untouchable' family in the village - the family given the filthiest of odd jobs to do - yearns to look fairer and better. He pines for his classmate, the daughter of an upper class family. The ones in the village who are better off dream of Mumbai. And those in Mumbai? Yearning for a quiet life in the village perhaps? The cycle is endless.

Director Nagraj Manjule sometimes chooses subtle symbolism and puts it blatantly in front of you at other times, as he exposes how frail our social structure really is. He does it while never taking himself or the film too seriously. Fandry, incidentally, means 'pig'; one of the many symbols used in the film. 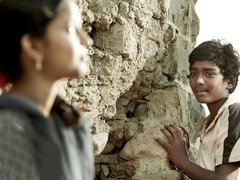 Fandry could as well be termed a period film; except that the 'period' shown in the film is today. Here and now. We know, because of references to the IPL and Facebook. But the manner in which man believes in the concept of superior and inferior, and how the ones considered inferior are looked down upon with vile disgust has held true since the dawn of humankind itself, and will likely continue far into the future.

If you think about it, it seems hard to fathom just how man came up with the concept of caste. But millennia of conditioning have come to mean that the 'lowest' in the social strata have come to actually believe that they belong at the bottom of the ladder. So, a father lashes out at his son who dares to dream, and who refuses to conform to what society expects him to be - the village 'untouchable'.

Fandry is, thus, heartbreaking. A boy old enough to not be termed 'innocent', but young enough to dream of a better life with honest sincerity isn't allowed to do so. You root for him, you want him to be allowed to dream, even if you can almost see that his dreams very well don't stand a chance of fulfilment. Because, you see, he represents all of us. We're all prisoners of what is expected of us; Jabya, the protagonist, symbolizes each and every one of us.

Fandry is scathing and witty in equal measure. Shot without frills and technical show-boating, it concentrates on what each frame, each event stands for. The characters are real, and real means gray. Whether it is enforced or whether it is out of free will; each character is made to conform. So, in one of the film's best moments, the whole village comes to a standstill - because they're 'expected to'. The what and why of it, I'll leave for you to discover.

The raw, rural Marathi dialect is tricky, so it helps that the film is subtitled in English. It also means that the film can reach a wider audience, particularly because it is one of the rare Marathi films to get a release outside Maharashtra as well. Fandry is a brutally honest film, one that makes you smile and brood equally. The production design and the cast play a large role in creating that world for you.

Somnath Awghade, who plays Jabya, plays him earnestly, with full conviction. He, as well as the boy who plays his friend, are so natural, it astounds you. Kishore Kadam, who tends to be the same in every film, is perfect here as Jabya's father. He makes you feel for him almost always.

Writer-director Nagraj Manjule, who also makes a charming little cameo as the village oddball, tells us a story with universal appeal, but in a manner that roots it to what he clearly knows best. At a crisp 103 minutes, the film is paced beautifully, and it has a simple guitar piece that is like the soul of the film. Everytime it plays, it seems like a dream - it reminds you that for all us, there's always something that's out of reach.

Fandry, then, is as much our story as it is Jabya's. True, we may not live in the village like him, and our dreams may not be the same as his. But then, as Manjule keeps reminding us, maybe they actually are; because nothing is what it seems.

Yay! Thumbs Up, by Anand Muglikar : I do not know why we cannot get what we want and why we have to behave like we are expected to. Why?

Yay! Thumbs Up, by rahulandrd : Get a DVD and watch it NOW !!

Yay! Thumbs Up, by Sandesh Mithbavkar : Awesome Movie, The review should have been much better.

I was speechless after watching it. I do not know why we cannot get what we want and why we have to behave like we are expected to. Why?

Such a beautiful film and such a pathetic review. Bad.

rahulandrd has given this movie a Yay! Thumbs Up(Get a DVD and watch it NOW !!). rahulandrd has posted 2 comments and has rated 2 movies. See rahulandrd's page for more details.
Sandesh Mithbavkar

The Movie shows the real India which shows the section of the society who are denied of opportunities. Have never seen such an Impactful end scene in any movie so far, be it International or Indian.

Samir has given this movie a Yay! Thumbs Up. Samir has posted 56 comments and has rated 37 movies. See Samir's page for more details.