A bunch of has-beens kick some serious backside in The Expendables 3, and they make a lot of noise while doing so. You have to be a serious action star fan with a lot of time and really strong eardrums to enjoy this one.

You'd think that somebody would suggest to the guys writing the cheques that sequels to uninspiring, sagging franchises won't quite cut it in the risky business that filmmaking is. Clearly though, nobody has done that yet.

A whole battalion of former stars, with some former stars as additions, are back to provide loud bangs, done-to-death action sequences and the occasional smile-worthy lines in a film that the world could have done just as easily without. The Expendables 3 is a film which does have at least a couple of moments that make you not dismiss it as a complete waste of time, but only just.

Expectedly, this one too begins with one rather far-fetched action scene, then proceeds to a few more, then finally ends with a long drawn action sequence. The question of what the plot of the film is, then, is moot. 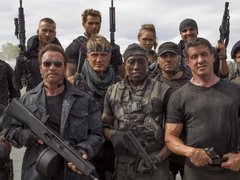 It's cute, honestly, how the film attempts to tackle themes like loyalty and love amongst brothers-in-arms; the awkward relationship that men share, when they can't be openly expressive about their genuine love and respect for each other, but how they will put their life on the line when the time calls for it. Too bad that the cynical times we live in means that for a substantial majority of the audience, these ideas belong in cold storage - quite like the men that make up the cast.

Even though the all-action-star lineup is well past its sell-by date, they do still have that slight lingering air of glittering machismo that once made the likes of Sylvester Stallone, Arnold Schwarzenegger, Wesley Snipes, Jason Statham and Harrison Ford into global superstars. Most of them look awkward on screen now, save for Jason Statham, who is also the only one of the lot who could actually ever act. The most welcome addition to the cast is Mel Gibson, who plays the baddie with unabashed glee; and he also gets the best line in the film.

Stallone, who has also been credited with the story and co-credited with screenplay, gets the meatiest role, though I use that term relatively. It is hard to see why anyone must actually be credited with the story here, because it is so merely functional that a couple of jagged cuts with whole lines of dialogue cut out - presumably the censor board's orders - seem to make no difference at all.

Hopefully, at least the plight of this film will make the makers see sense and not subject us to a part four. Even if it does, I doubt a review of that film will read any differently than this one.

Was looking forward to seeing this one given the opportunity impressive lineup of actors. But then, as Pradeep pointed out, they're all well past the sell by date.

Fan has given this movie a Want to Watch. Fan has posted 714 comments and has rated 200 movies. See Fan's page for more details.
Fan

Fan has given this movie a Want to Watch. Fan has posted 714 comments and has rated 200 movies. See Fan's page for more details.
Ehinome Okojie

This film is a flop show in the US, who cares about having over 7 non actors in a so called action film, it is better to watch Bhojpuri masala; afterall who cares about these stars in the States, Films work over there due to marketing initiative in other words a film with Harman Baweja on 600 screens if well marketed can do better than a a Shahrukh Khan film with 3000 screens that is poorly marketed, see MNIK, had the distribution been tactical it could have grossed $11m but they chose to expose the film to a small scale general audience giving chance to mixed reviews and a rapid drop in films revenue thus earning $4m.