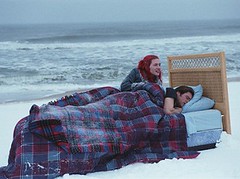 Eternal Sunshine Of A Spotless Mind

Disclaimer: You’re going to get confused, starry and you’ll be yanking your hair to understand exactly what is going on in Eternal Sunshine Of The Spotless Mind. Director Michel Gondry and Screenwriter Charlie Kaufman come up with a surreal story that depicts the love story of a couple that define the phrase 'opposites attract'. It’s a roller coaster ride; only your eyes are wide open and you’re constantly trying to come to conclusions about the position of the film. It’s a story about two people who fall in love, break their hearts and just don’t know what to do with the memories.

There are only so many ways to portray fate-defying love in a film. There’s tough love, where the pair fights against all odds. There’s the cheesy way, where you’re made to believe the couple were always meant to be together and there’s Michel Gondry’s Eternal Sunshine Of The Spotless Mind. The latter is a story about a man and a woman, but it is interspersed with memories in such a manner, it forms a mashed, tangy concoction that tastes of our favorite cliché: Love conquers all.

The Academy award-winning screenplay written by Charlie Kaufman is one of a kind. Joel Barish (Jim Carrey) and Clementine (Kate Winslet) randomly meet on the train and hit it off. They’re an unlikely pair; Joel is passive, meek and yet bursting with intense thoughts. Clementine is fresh, impulsive and like a sweet smelling lightening bolt. The film goes back and forth in time to reveal to the viewers that these two have been together before their chance meeting.

A scientific procedure they both undergo, allows them to erase certain memories. You’re running around with them, trying to remember why they were in love, what they forgot and remember, who erased who first- but you’re not running in along a straight line or even once-around a circle. It’s an insane loop, going round and round, leaving a little jolt at every breather.

It’s a thrilling experience – but one that can be experienced only by living it through. The core of the film lays in the questions it leaves you with- Do memories define our existence? Are forgotten memories an easy route to blissful ignorance? Are we really better off erasing memories that cause pain?

The editing and cinematography are crisp, achieving the purpose of an anticipated confusion. Background score consists of an inspiring mix of songs, all pointing to the themes of the film. Jim Carrey and Kate Winslet are fascinating in the film. They play all parts with utmost conviction, be it the conflicted past, the warped memories they are transported into or the ignorant present. As a viewer you are constantly wondering how such opposites could be crushed into the power of love, so much so that they get two chances to walk their journey.

The Focus edition of the DVD has some bonus features including an audio commentary with Michel Gondry and Charlie Kaufman, where they discuss the concept, the production hassles and deleted scenes. It also has a 7 min making of clip, which is more like a trailer, but the prize of the DVD is a 12 min witty conversation between Michel Gondry and Jim Carrey where they both talk about the relationship between an actor and a director and how Carrey interpreted the story of the film.

Watching Eternal Sunshine Of The Spotless Mind is similar to having someone make you rapidly walk forward, then backwards and then forward again with a kaleidoscope, for an hour and a half. Your head becomes woozy, you might not understand or be able to conclude but you’ll realize that love happens in many ways. You can’t really re-attach broken pieces of a vintage vase and pretend that it never broke, but you won’t be able throw it away either. It’ll lie somewhere in the corner of your house, and you’re going to run into it at some point- much like the memories Joel and Clementine share of one another. Can a spotless mind ever stay eternally bright?

Yay! Thumbs Up, by Shweta : Non linear fashion feels good as the story unfolds. Its like you are getting to know the characters.

Shweta has given this movie a Yay! Thumbs Up(Non linear fashion feels good as the story unfolds. Its like you are getting to know the characters.). Shweta has posted 9 comments and has rated 5 movies. See Shweta's page for more details.
meetu

Readers' reviews. Before I voted, that is.

Shweta has given this movie a Yay! Thumbs Up(Non linear fashion feels good as the story unfolds. Its like you are getting to know the characters.). Shweta has posted 9 comments and has rated 5 movies. See Shweta's page for more details.