Denzel Washington in a familiar role and director Antoine Fuqua trying hard to avoid the frivolity of his last film together make The Equalizer seem like one of those where you're not quite sure what the point was. Still, the film is watchable because Washington is always a class act.

Antoine Fuqua, whose last film Olympus Has Fallen was as silly as it could get, has made a dramatic u-turn with The Equalizer. A calculated, dark film with Denzel Washington playing the kind of character he's almost come to be synonymous with, the film often gives you a sense of deja vu - but not always in a good way.

The Equalizer is a rather strange film, to be honest. A dark thriller can either be racy, or it can be measured. Fuqua chooses the latter path, and takes it to the extreme. No surprises, no heart-in-your-mouth moments, no twists to grab at you - nothing.

Denzel Washington plays Robert McCall - a regular man with a seemingly regular life, which he makes an attempt at living like clockwork. But he has a past, McCall - and it comes to the fore when the situation calls for it. 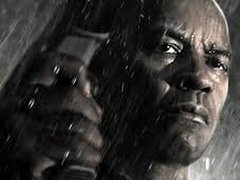 Everything in the film is understated - the humour, the gloss, the grunge - all of it. Washington's McCall is a cool customer at all times; yet he knows how to wield not just regular weapons, but ordinary household object as weapons as well. The reason for it, McCall's back story is only hinted at. We never get to know why he went from some sort of special-ops or military to living a staid, lonely life. Presumably, he's done stuff he's either ashamed of or regretful for.

And then, we never quite know why McCall turns it around again, as the events of the film unfold. Perhaps it's him feeling sorry for a character who, from his perspective, is having it rough. Or it is just a case of a leopard not being able to change its spots. Either way, McCall takes it on himself to fight injustice and evil when he sees it, in a manner that he deems fit.

Denzel Washington, and indeed Robert McCall, are ice cool in more ways than one. A Sherlock-esque ability to read situations; a pleasant, fatherly demeanour; deadly fighting skills - he's a perfect movie character, in a manner that confuses even other characters in the film. It is in this aspect, of straddling a realistic and edgy treatment style with out-and-out 'movie' characters, where The Equalizer stumbles often.

Everything seems to be carefully planned out. When one deliberately chooses a realistic tone to treat the film, the tone lends itself to a feeling of unpredictability, of not knowing what might happen next. But with The Equalizer, that never happens, because with characters like these, you know exactly what's going to happen. It doesn't help that Fuqua further inserts 'cool' cinema techniques like the slow motion and rapid cuts once in a while.

The film thus ends up becoming most fascinating only on paper, particularly with its title. It's an unequal world; a world of haves and haves-not; a world where someone is always one-up on someone else. In such a world, you need someone to bring that balance, to even things out a bit. To equalize.

Trapped in his own image, Denzel Washington still manages to rise above that and seem like the guy you'd want on your side when the odds are stacked against you. But in walking the tightrope between the real and the reel, you end up confused about whether the directionless journey of this character really amounts to much.

With all of this and the slow pace of the film, you often begin to think of the point of it all. The shot-taking begins to seem redundant, all of it seems like a soulless exercise, and it leaves you feeling distant and uninvolved. Bad guys who're good and good guys who're bad - both kinds make for fascinating movie characters if they manage to touch your heart. The Equalizer makes sense for the most, but it just doesn't touch the heart.

Want to Watch, by Anup

doesnt matter how the reviews are ,, but the combination of Denzel Washington & Antoine Fuqua will always be an attraction for me....defiantly gonna watch it....

Anup has given this movie a Want to Watch. Anup has posted 437 comments and has rated 108 movies. See Anup's page for more details.
Fan

I found the film too slow. The promos / trailers focused on action scenes and dramatic dialogues. Thus giving the impression that this is kind of Enemy of the state or Die Hard film genre.

Because I went to watch it expecting a fast action packed movie, I was kinda disappointed.

Otherwise it's an okay watch, though not the greatest of films. Let's face it, for such films you know that in the end the bad guys are going to be wiped out. Would the good guy also be wiped out is an academic curiosity. Given that the lead actor is shown to be extremely attached to his late wife, and that the only other female lead is his daughter's age, one could calculate the probability of the lead actor's fate. And so in the lack of fast pace action one then hopes that the plot/trap that the underdog hero would lay to get the better of an extremely organised mafia would be a great affair. But I felt letdown even on that front.

In short, don't go with too high expectations to watch Equalizer. It's an okay one time watch. And there's no regret in case you miss to catch it in theatre.

Fan has given this movie a So-So. Fan has posted 714 comments and has rated 200 movies. See Fan's page for more details.
Fan

Of course one could be right or wrong in the probability calculation of the lead actor's fate ;-)