Doug Liman's Edge of Tomorrow is a nicely executed action sci-fi flick, one which benefits from its brisk pace and the exciting lead pair of Tom Cruise & Emily Blunt. Cruise's humour works well, as do the action scenes.

The guilty pleasure of the summer is here. Doug Liman's Edge of Tomorrow is about as much fun as one can have with a sci-fi action flick starring Tom Cruise.

Based on a Japanese novel titled 'All You Need is Kill' (which was also the supposed title of the film for a while, before the current name was settled upon), the movie feels like a mash-up of a number of films, including Source Code, Groundhog Day, Starship Troopers, Independence Day and even a little bit of 2013's Oblivion, also starring Cruise. 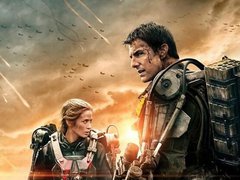 With its quite relentless pace, some daringly sharp editing, and a terrific lead pair in the form of Cruise and the gorgeous Emily Blunt, Edge of Tomorrow makes for an engaging actioner; one which makes you gloss over its weaknesses because of how smartly it tackles the rather outrageous story at hand.

US Army Major William Cage unexpectedly finds himself in the middle of a war in Europe, against an invading alien race, and as he reluctantly goes at it, he ends up in the strangest of predicaments - he is stuck in a time loop, where he wakes up at the exact same point everytime he dies. The only option he has now is to continue living that day over and over again.

One of the big question marks raised early in the film is why Cage is made to go to this war at all. It is never fully explained, and it is about the only time in the film you get time to question any of its logic. Once he's in the middle of it, the pace of the film never lets you pause to ask questions.

In these time-loop scenarios, one of the biggest worries one faces as an audience is the reason for the time loop occurrence. Luckily, not only is the reason for it in Edge of Tomorrow satisfactory, it is also quite believable in the larger scheme of things.

And one of the big, intriguing mysteries of the film, something that no one will ever have the answer to, is how many times does William Cage actually live that day? A hundred time? A thousand times? Even more? We can't tell, and that makes the film so much more enigmatic, because Cage is the only one living that day over and over again. For the rest of the world, at the end of all of it, just one day has passed.

The humorous undercurrent throughout the film is a great help, as is some terrifically staged action. Even though some of it can be visually overwhelming and tough to follow (particularly in 3D), the film has an action film heart, and it sticks to it admirably.

One does miss a truly impactful and memorable background score, however, which is so important in a film like this. Apart from its rampaging action and sci-fi leanings, the film is also ultimately about unsung heroes and a strange sort of doomed love story. With big-scale films like Edge of Tomorrow, such emotions stay with you much after a film only if it has a powerful music score to go back to. Unfortunately, the film's music is purely functional.

Cruise and Blunt, of course, rank among the best things in the film. They react to each other like firecrackers, and it is a pleasure to see a female character in a big action film get so much scope to perform action - almost as much as her co-star.

Edge of Tomorrow can be taken to the cleaners if one truly wants to - films in the action sci-fi genra can almost always be torn apart for logic. But sometimes a film is so blatantly honest in its intentions, that you're willing to let it have its way. Edge of Tomorrow is an enjoyable film multiple times over; and I suspect it will make for fun repeat viewing as well.