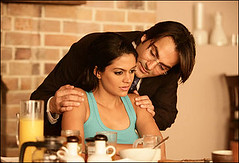 Each of the short stories has a punch at the end. The characters are remarkably developed with about 10 minutes for each story. The subjects chosen are such that everyone is likely to enjoy at least half of the stories

One of the main differentiating factors of short films is that they leave you with a punch line for closure. Now such lines do not necessarily work always. And that’s the case with these 10 short films too.

As the titles depict, Dus Kahaniyaan is a kaleidoscope of images, stories, narrative styles, issues. Almost all of the ten stories are about loss - loss of love or blind faith or friendship or life itself. Each story has a theme of its own and a thick vein of sexual desire runs through more than half of them.

I thought that watching ten stories at one go was a little exhausting. It was like having to start, accelerate, reach a high, shut-off, and restart all over again every ten minutes. I also thought the order in which the movies were placed was interesting. By the third film or so you are anticipating the punch and by the seventh one you can pretty accurately guess the twist. I think fewer movies wouldn't have given the audience the chance to guess and would have left a better impact. (Yeah, they would have to change the title song a bit.)

Not to mention that we wouldn't have missed a couple of them anyways (Lovedale and Sex on the Beach). While I wouldn't take away marks for the concepts being weird, they just didn't go well with the general tone of the collection. Then there were a couple that were preachy (Zahir, Gubbare, and Rice Plate). But while Zahir keeps you guessing till the very end, the other two were saved from being boring by some brilliant acting.

The veteran actors show how it's done. Shabana Azmi, Naseeruddin Shah, and Nana Patekar make you forget their status in the industry and empathize with the characters they play. Unfortunately, the same cannot be said of the rest of the cast. While some of them are a little above average, the rest are barely mediocre. Be that as it may, every story got you involved and established characters really well within the 10 minutes assigned to it.

I found the lighting and the camerawork pretty distracting in a couple stories. Matrimony had absolutely unnecessary usage of handheld camera and bright background lights. On the other hand, the same effects created the required mood for High on the Highway and Rise and Fall. I liked the narrative techniques of these last two as well.

As a movie buff, you couldn't have asked for a better deal. 10-in-1. But, like any equipment that boasts of being "so many"-in-one, this one too is a jack of a few trades and a master of none.

Parental Guidance: Not only are the touched upon issues about adult relationships, there is a good amount of sexual content and quite a bit of violence.

Thumbs up, by Nikhil Kumar, Apun Ka Choice : ...The appeal of ‘Dus Kahaniyaan’ lies in the novelty of its concept.... full review

Thumbs up, Bollyvista.com : ...In fact, all the stories, have an extremely grainy look and the characters have jagged edges... full review

Thumbs up, by Fatema H Kagalwala, Business of Cinema : ...The seemingly intriguing experiment of putting together ten stories and not connecting them visually or otherwise holds a simple desire to tell powerful stories with a human interest... full review

Thumbs up, by Bikas Mishra, DearCinema : ...Though after a while you could see some kind of a pattern in all the storie... full review

Thumbs up, by Taran Adarsh, IndiaFM : ...the number of interesting kahaniyaan in DUS KAHANIYAAN outnumber the not-too-interesting ones and that's what goes in its favor.... full review

Thumbs up, Indicine : ...Rice Plate and Gubbare are the best and that itself is worth the price of the ticket.... full review

Thumbs up, by Abhijit Mhamunkar, indya.com : ...While six out of ten stories are good, the rest range from average to okay... full review

Thumbs up, Movie Talkies : ...While the entire package of ten is rivetting in itself, not all strike an emotional chord as the Rice Plate, Puranmaas and Gubbare do.... full review

Thumbs up, by Elvis D'Silva, Rediff : ...we are shown a little bit of what the future might hold if we allow our lives to go the way they are going.... full review

Thumbs up, by Nikhat Kazmi, Times of India : ... Almost all the stories are deftly told, with the mandatory twist in the climax which keeps you riveted... full review

So-So, by Rachel Fernandes, Bollywood Mantra : ...Also most of the ten short stories have a slightly dark or vague or abstract concept which makes the audience want to stay way from it.... full review

So-So, by Praveen Lance Fernandes, indiatimes : ...Maybe every tale is not gripping but about seven of the ten are not bad... full review

So-So, SantaBanta.com : ...The stories therefore neither cohere nor connect together, but are interesting and often riveting in fragments... full review

Thumbs down, by Rajeev Masand, Business of Cinema : ...with nothing at all to rein them in, no boundaries whatsoever to work within, several of the stories turn out bizarre, abstract and pretty much pointless,... full review

Thumbs down, by Khalid Mohamed, Hindustan Times : ...This is the worst of the lot directed by Apoorva Lakhia, who also obsesses over a fat lady in a gold bikini... full review

Thumbs down, by Sreeram Ramachandran, M TV : ...Most of the stories have extraordinarily slow and tiresome build ups without a powerful enough twist in the end to justify it... full review

Thumbs down, by Amit R Agarwal, merinews : ...Meghna Gulzar’s ‘Pooranmashi’ was such a strong story, but since it lacks the tension, it just fell flat... full review

Thumbs down, by Deepak Venkateshan, Passion for Cinema : ...please do not see it to see some stories as there are none and it could have just been named “Dus Bakwaas Rip-offs”... full review

Thumbs down, by Sonia Chopra, Sify Movies : ...since this is a Sanjay Gupta film, there’s lots of skin (no fully clothed women allowed in Gupta’s films unless they’re over 40), lots of violence, and the mandatory underworld story with lots of gore shore in stylized slow mo... full review

Thumbs down, Upper Stall : ...Dus Kahaniyan is essentially a collection of amateur shorts spliced together for a private screen of friends and family and nothing more... full review

10 short stories, each with a theme of its own.

The stories were too short for me to observe the little things. If I happen to catch it a second time, I will surely update the sections that are usually here. Meanwhile, if you have any observations, do leave them in the comment section.

Ajay, I actually liked High on the Highway quite a bit. The narrative leaves a few questions which could have very interesting answers. I didn't enjoy Lovedale, because it seemed very contrived.