Dunkirk is probably the best movie I have seen this year. It’s got an edge-of-your-seat tension throughout. It’s well acted, well directed, and well written. It shows you all the horrors of war while depicting one of the biggest evacuations in history. An intense beginning, an action-packed middle, a perfect ending, along with the weight of being based on a true story, make this movie a brilliant watch.

Christopher Nolan strikes again with yet another engaging film. Dunkirk is a tense story about an evacuation that affected the lives of hundreds of thousands of people. Only the first minute or two are spent in bringing you up to speed about the situation, and from there on it’s just non-stop action and tension.

We need movies that tell us about the sacrifices made by all the people who go into war.

It follows a few different storylines, and handles them perfectly. When one storyline’s action subsides, we cut to another, which throws us back into a spiral of seemingly endless destruction.

The plane scenes are easily my favourite. They are the most action-packed of them all - from the frustration of missing the German planes, to the relief after one is brought down. We follow an RAF pilot, Farrier (Tom Hardy), also known as Fortis 1, as he tries to defend the soldiers on Dunkirk beach from the German bombers. He is smart, brave, and has a brilliant presence of mind. What’s amazing about this is that all of this is understood with just one slick maneuver. From then on, you are completely invested in this character.

Then there are the scenes with the civilian boat. We follow Mr. Dawson, his son, Peter, and Peter’s friend, George, on a quest to Dunkirk to save as many soldiers as possible. He’s a considerate, caring man, and knows a lot about planes. This is also evident from just one scene.

This is one of Dunkirk’s many strong points. Every character’s traits are brought out from one single moment. A shining moment of glory for one character, and now we know all about this guy (Yes, “guy”. Not very many female actors with lines. I counted a total of two, with one line each. However, this is World War II, so...). 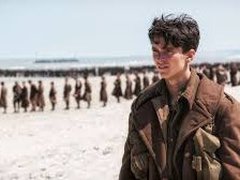 The scenes on Dunkirk beach were the most tense of them all. You see the soldiers standing in line, waiting to get on a boat that will take them home. You want them to get home, but all hell breaks loose. Then it subsides, only to throw you back into that abyss of tension and destruction. And repeat.

Nolan’s narrative style of non-linearity comes in handy, yet again. He'd be the last person to spoon-feed and yet you are thankful for the absence of , “THREE HOURS EARLIER” or “ONE DAY LATER”. He shows it to you, by replaying dialogue or by reusing shots. However, you don’t notice it much in the beginning, you figure it out eventually. The subtlety is even more pronounced in Dunkirk. Yes, I know, ironical, right?

When one storyline’s action subsides, we cut to another, which throws us back into a spiral of seemingly endless destruction.

The only problem I had with the movie, and it’s very minor, is the music. Initially, it’s awesome. Hitchcockian, in a way: telling you of impending doom. However, it gets irritating. It’s constant ticking. “Tick, tock, tick, tock, tick, tock.” Only ending at the very end, when everything is over. When you know it’s all over, you still hear the ticking, and you think, “What now?”

Now, I know it says that the runtime is 120 minutes, but it really feels like 90 - at most. It moves fast, and keeps you on your toes. I was surprised when it seemed as if the movie was ending, because it felt like only ten minutes had passed! However, I did not look at my watch for fear of missing something.