Dumb and Dumber To

Jim Carrey and Jeff Daniels, unbelievably, still seem in character 20 years later, in the sequel to the cult comedy Dumb and Dumber. Miraculously, they've gotten even dumber with age. Dumb and Dumber To is funny in spurts, but is mostly loud and ends up trying too hard. There's some fun to be had if you have fond memories of the first film, but watch it only when you're in the most forgiving mood, ready to laugh at the most offensive or juvenile jokes.

There is at least one generation amongst us that was (un)fortunate enough to have the Farelly brothers' Dumb and Dumber as a part of our growing up - a film that most of us remember as an audacious, politically incorrect hoot. And yes, some of us have actually spent a lot of time wondering, between Jim Carrey's Lloyd and Jeff Daniels' Harry, who is 'dumb' and who is 'dumber'.

That generation probably is also the only target audience for the sequel that has come 20 years later. Harry and Lloyd are also 20 years older, and they seem much dumber, though no less adorable. Unfortunately, the generation that's around the same age as I was when the first film came out is also significantly smarter and so much more worldy wise than we who first saw and loved Harry and Lloyd. That could be one key reason why Dumb and Dumber To will not make the splash the earlier film did.

Make no mistake, the sequel is as audacious and politically incorrect as the first film. It's just that the humour has gotten old - and I'm talking about stuff like a cat that farts bird feathers. No one is spared - old people, young women, animals, Canada - everyone is fair game for Harry and Lloyd. 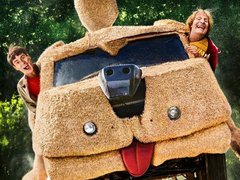 The duo are off on a journey to find Harry's daughter, who was given away for adoption as a child. Finding her is not easy at all, particularly because Harry and Lloyd have to deal with, well, themselves.

There is just one reason to watch Dumb and Dumber To - or two reasons, actually - Carrey and Daniels. Both look much older now, but admirably, neither of them seems low on energy. They're always up there, giving every gag their all, even though there are only a handful of genuinely funny moments in the film, and most of these involve unusually clever writing and/or pop culture references. Breaking Bad fans, for instance, will surely cheer the brief scene that shows Harry's new roommate.

The writing for the most part though, is puerile. There are times when the loose writing leads to scenes where a lot of noise is made on screen, but not a soul in the audience laughs. As I mentioned earlier, some of the humour is so obviously dated, that it doesn't even get points for trying.

Some of the humour in the film is also genuinely offensive - so much that you'd need a hugely open mind to not get offended or disgusted. A lot of it is also sexual in nature, though the laughs derive from the fact that Harry and Lloyd are usually the last to figure it out.

What's still great to see, however, is Harry and Lloyd's friendship. Dubious for the most, where you don't really know if they're actually friends or they're just too dumb to know any better, this was also a hallmark of the earlier film - the fact that when it comes to it, the pair will stand by each other and go to the moon to help the other. It's naïve and silly, but also a little sweet. There's solace in the fact that fondness, affection and love can transcend not just space and time, but IQ as well.

But that's me being kind to characters that I'd always find it tough to be mean to. Dumb and Dumber To, propelled by two fine actors who let themselves go completely, is loud and sporadically funny. It works well for the sake of nostalgia, and may also make for a fun watch in a large group. Expecting anything more is akin to auditioning for a lead role in the film.