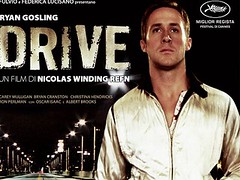 With a predictable narrative, Drive oscillates between being secretive, existentialist and like a retributive crime film; with splashes of a homage to B-grade car-chasing movies. With a brooding, charismatic protagonist, cracker one-liners and bloody violence (with sufficient build up) Drive is 2 hours very well spent.

Nicolas Winding Refn’s Drive begins with a cursive pink-font opening-credits, and the kind of background music you would hear in a car - semi-thumping, lounge-ish beats with a 80s retro-electronica pinch (take a bow Cliff Martinez). We are then introduced to the film’s unnamed protagonist, the Driver (Ryan Gosling).

With a half toothpick, a scorpion jacket and brooding eyes, he moves through the entire film with an unnerving calmness. I can’t say the same about my journey of the film though – Drive manages to break the hypnotic spell, the moment you just about get into the grovoe of its controlled, thought-provoking cinematography and trance like, anticipated soundtrack.

Drive is a neo-noir, smooth and sporadic film about an edgy hero (and I use this word deliberately) and his escapades. Refn uses the archetypal split-lighting to establish the driver’s character, followed by the hovering cloud of a western film (in which the protagonist’s an unadulterated badass).

By day, he works as a car stuntman and part time, in a garage. By night, however, he drives. No really, in his words, "If I drive for you, you give me a time and a place...I drive. "

Abandoning all morals (quite unlike his job and his overpowering image), he stands as an amused observer of the corrupt world he’s a part of. There, the Driver gives you a slight aftertaste of films like Taxi Driver. The film uses a popular, pulp fiction-esque narrative. Of course, the treatment is stylistic, a nasty bit of a tease. It’s a hide and seek of what-now and wow-really?

You see similar signs – the pink font, an opening sequence which establishes the feat of our protagonist, the jarring car chases, and the bad guys who are almost like contemporary Mafia lookalikes. Yet the film doesn’t take a moment to jump from a subtle cat-and-mouse chase to a full blown blood war. There are skull-breaking, knife diving moments in the scene almost as if Refn wanted to celebrate the idea of violence by making us believe it was never going to cross our paths.

Driver’s bond with his neigbour Irene (the sensual Carey Mulligan) is silent, and furthered by his relationship with her kid, while her husband, Standard (Oscar Issac) is in prison. The film takes a bloody turn, when the Driver helps Standard in a heist to clear his debts and issues. Here starts the predicament (read: almost sadistic war of the blood splatters.)

However, at some point during Drive, the stylistic treatment of the fights between good and evil takes over the plot of the film. You realize soon into the second half that the story has been abandoned to take upon the intended feel of the film – one that we had only been given glimpses of through the first half, mostly through the Drivers lilted, calm voice and brooding eyes.

You also question the driver’s motive for all this violence, because somewhere amidst the rhythmic visuals and the colossal build up, Refn fails to establish a concrete relationship between the Driver and Irene. You don’t understand how someone like the Driver, who otherwise seems like he doesn’t give two bricks about anything, would undergo all this mess for a woman he barely spoke 8 words with.

Once you accept to move past these questions, Drive is a hard-hitting, dark and downright entertaining film. Might not work for the faint-hearted, but the good thing of Drive is that it gives you enough to think-ponder-mesmerize before the violence starts.

Yay! Thumbs Up, by Bijoy Bharathan : Absolute stunner of a car-movie. Ryan and Carey are the driving forces in this smashing thriller

Yay! Thumbs Up, by Noopur

I know, right? Surprisingly violent - it was so brilliantly built up :)

Hi Swetha,
Just read your review now. Was quite an interesting read. I agree to your comment about how the romance between Irene and the driver was not developed to a satisfactory level. I have also posted a review of this film on my blog. Do check it out. It'll be fun, I can assure you that.