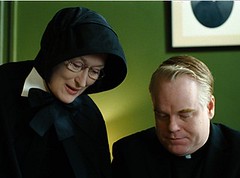 When you’re in doubt, you’re pulled in various directions. Your arms hurt from being tugged by every extreme that stands on it’s conclusion – John Patrick Shanley’s Doubt makes us understand the complexities behind a doubtfulstate via the story of a catholic school and it’s doubt about an incident that changes the characters’ life. If the truth is a postmodern concept – doubt let’s you explore every syllable of it without affirming to anything. Much like the film, where you watch, try to deduce, calculate, speculate and end up sitting down exasperated, taking that comfortable breath of doubtful questions.

As a child we’re always told to not fear when in doubt – that a solution will always appear sooner or later. It made us seem that doubt was a horrible thing, lying there under our beds with the cookie monster, conniving and scheming to turn us into complex individuals. John Patrick Shanley’s Doubt celebrates that limbo feeling of neither-here-nor-there. It celebrates doubt, not in a conventional way but in a manner that makes you agree that every question needn’t have an answer.

Starring Meryl Streep, Philip Hoffman, Amy Adams and Viola Davis (all four received academy award nominations for their performances), Doubt is set in a Catholic school in 1964, at a time when the church was undergoing a reformation. Streep plays the principal Sister Aloysius, who is an authoritarian and a traditionalist. As a contrast to her, we have Reverend Flynn (Hoffman</strong) who is progressive, kind and believes in building relationships. Amy Adams</strong who plays an inspired young nun with a pleasant and calm demeanor.

The conflict arises when Reverend Flynn is accused of abusing the first black child in the school. There is no evidence provided to prove either side – neither to Sister Aloysius, nor to us as an audience. Rev. Flynn is just shown to be kind and empathetic towards the boy who gets bullied because of his colour. We swim around in a circle of questions, much like the other characters in the film, who oscillate between many a Yes, No and Maybes.

During the film, you forcibly try to deduce an answer, scrounging around for hints that point to a tentative explanation - because we all need those explanations, for us to feel sane and normal. The beauty of Doubt lies in its rejection of confirmations. The movie provides you with no answers, and let’s you gnaw on an existential crisis through the film.

The film’s tone is somber, with slow plot movements, a calm yet eerie piano foiling the background score and emphasized performances by all the characters. Hoffman and Streep play staunch opposites and thus, the pressure to pick a side elevates.

Doubthas what you would call powerhouse performances. You see the film through several points of views – Hoffman, who makes you believe he is innocent, Adams who makes you live the frustration of torn sides and Streep who is the reason behind your doubt. For all her firmness and staunch beliefs, her eyes always have the question mark. Viola Davis plays the child’s nerve-wracked mother, who furthers your sense of doubt.

Doubt was adapted from Shanley’s play Doubt: The Parable – when you learn this fact you see how wonderful this subject matter would be as a play – with its scope for drama, tension and dense self-questioning. The DVD has a 19 min featurette titled ‘From Stage To Screen’ where Shanley talks about the adaptation. The DVD also has interviews with the Cast, an audio commentary of Shanley and a few extended scenes.

Watch Doubt, so you can experience the joy of rejecting closure. The truth won’t always mean closure, and closure isn’t always the truthful end. In doubt, you can truly remain.