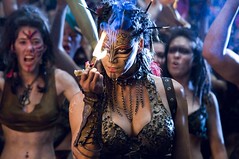 Futuristic action adventure film, which hustles along in a most entertaining manner.

Director Neil Marshall has been heavily influenced by two important action movies of the 1980’s; an influence that becomes very obvious the moment the film starts. One of those movies was George Miller’s low budget Australian film Mad Max, starring a then unknown Mel Gibson, and the other was John Carpenter’s Escape from New York. Both movies dealt with the future, a future where mankind and civilization lie in ruins and the only law that prevails is that of the jungle.

Doomsday deals with very much the same scenario except for a few minor changes. The heroine here is a woman, Eden Sinclair (Rhona Mitra) and in an obvious reference / tribute to Snake Plissken’s character in Escape from New York, she too has an eye patch. The rest of the plot is quite the same, with a few additional elements thrown in. So how does the director rework the scenario?

Well, I must say he does a pretty good job of it. For one, he does not take himself too seriously, that is for sure. He looks like he is having fun and that is wonderfully evident in a very campy scene where the leader of the Gangs / Punks, Sol, holds an audience, literally. There are strippers doing the pole routine, then a group of hefty men in tartan skirts dance the Can Can while the crowd roars uproariously, and as a climax we have a prisoner being roasted alive in a huge barbecue, with Sol shouting much to the delight of the audience “We have a rare treat in store for you tonight! Medium... fucking... rare!” And if that is not enough, the director sources material from another realm of fantasy, that of Arthurian legend, and locates nearly one third of the film in that realm. There is an excellent fight sequence, where an unarmed Eden Sinclair fights a huge skulking armored brute in a most violent joust.

We are not given too much time to think; footage is not spent on establishing character; the story is on cue and rolling right from the start. There is a back story, but that is very quickly dispensed with a voice over and a few frames. The rest of the film plays on one of the deepest fears that we have as human beings; that of departure from a zone of comfort to an Unknown zone which holds all possible terrors. There are no reflective moments in the film at all, none of the characters indulge in any introspection, and this gives the film a sort of breathless rush. And then there are the car chases, all of which involve a Bentley Continental GT Speed driven by Eden Sinclair. The chase sequences are a direct tribute to Mad Max, and even though the stunts are all what we have seen before in a thousand other films, it all makes for great enjoyment. We are not spared the gore either; bodies are crushed under wheels, heads get lopped off, and are also cleaved in fine fashion. Somewhere there is also a message of political duplicity and of public office being used to further one’s own ends, but this is all too brief for it to really matter.

Rhona Mitra makes a good action heroine, she is lithe and lean, and has the narrow eyed, square jawed look so essential to playing such a character. Her face conveys a sense of vulnerability too, and that balances out her tough and bleak portrayal. Bob Hoskins makes an appearance, and so does Malcolm McDowell. The film offers us nothing new, but it is all done in such good spirit, that one finds oneself enjoying the whole spectacle, and also rooting for the good guys.

PS. An interesting aside is the character of Sol, played by Craig Conway. In this film he is Malcolm McDowell’s son.
Years ago Malcolm McDowell had played the character of Alex Delarge, the vicious and sadistic Droog leader in Stanley Kubrick’s controversial film, A Clockwork Orange. Craig Conway’s portrayal of Sol has shades of Alex. Like father, like son? (Sol literally means sun, hmm, the director indulging in a bad pun to make his point!)

A virus threatens the future of the human race and a team is sent to a forbidden zone to find a cure.