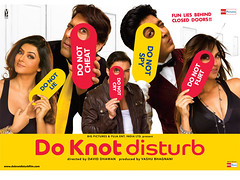 Quick! Read it as a typo. Read it as 'not' instead of the numerologically correct 'knot'. And start with the ticket-seller. Do not disturb the Box Office.

A few people complain that I take "without giving the movie away" too seriously and I should at least give a bit of the story outline. Here you go - an infidel husband is trying to hide his illicit affair from his wife who's keen on finding out more about the woman who is nagging her boyfriend to leave his wife who has hired her admirer to spy on her husband who has hired a man to pretend to be his girlfriend's boyfriend who is trying to escape from the girlfriend's ex-boyfriend. And I'm not making this up!

I truly don't even know which pulled hair to begin with, for slapsticks like these. They take my frustration with "brains out" school of film-making to astounding new levels. How come? Because they take actors like Ranvir Shorey and throw them down the chute. Ok, can't complain about Govinda and Riteish Deshmukh because they have set themselves in that groove. Though they know and so do we, they can do much better comedy if they were given a chance to. But, charming Sushmita Sen - with or without the extra weight? She can act, most certainly better than this. Same goes for Lara Dutta. I've always liked her for carrying of all kinds of attires in style. But the skin on display here is yuckety yuck!! And all she does is shriek, shriek louder and some more.

And as if that weren't enough there's a sequence in the film when Govinda and Riteish Deshmukh adopt a female voice. And by definition women shriek, right? Right! So at one point there were 3 female shrieks on at once. Oh, the nightmare! Actually, I think most of the dubbing was heavily processed by the latest equipment available for editing. I refuse to believe any human could create so much noise so consistently for such a long time.

And not so much as half a punch line in this never-ending circus. Not a single gag that could bring as much as a smirk out of you.

I sound so petty trying to find faults in a film that might actually have felt offended if we liked something about it. Zilch content unless loud tight slaps, louder background music, moronic situations can make a non-negative contribution to content.

The religiously inclined, please let the movie-watching audience know what ritual we need to conduct to send the Dhavan-Govinda combination to retirement. Please, please, please, oh mighty ones, please tell us…

Thumbs up, by Taran Adarsh, Bollywood Hungama : ...the motive, like always, is to keep you in splits and DO KNOT DISTURB succeeds to a large extent. ... full review

Thumbs up, by Deepa Giramella, fullhyd.com : ...suffers from logic about as much as a tipsy party-goer suffers from woolly-headedness... full review

Thumbs up, by Proneet Dutta, Passion for Cinema : ...Dhawan is not really a great director , but he definitely is one of the best editors .... full review

Thumbs up, by Pankaj Shukla, SmasHits.com : ...Govinda as an entertainer strikes back. He shows his mettle once again and also proves that he is not an actor to do away with easily. ... full review

Thumbs up, by K K Rai, STARDUST : ...Lara Dutta, who plays the sensuous supermodel in love with a married Govinda, seems to have developed a flair for comedy, and comes out winner ... full review

So-So, by Nikhil Kumar, Apun Ka Choice : ...Govinda is back in form but is let down by a script that doesn’t have much new to offer... full review

So-So, Indicine : ...Sushmita Sen has put on a lot of weight for her role, yet she looks good and acts well. ... full review

So-So, Movie Talkies : ...what is superb about the film is its screenplay.... full review

So-So, by Minty Tejpal, Mumbai Mirror : ... The dialogues are consistently inventive, while a few sequences, like Govinda speaking in a ladies falsetto voice... full review

So-So, by Avijit Ghosh, Times of India : ...And his loyal single-screen fans might still enjoy the way he says, Dolly, Dolly¸ Dolly, every time he sees the stunning Lara Dutta. ... full review

Thumbs down, by Noyon Jyoti Parasara, AOL INDIA : ...Technically the film does not look half as sleek as David’s last film ‘Partner’ and neither does the music work. ... full review

Thumbs down, by Baradwaj Rangan, Blogical Conclusion, The New Sunday Express : ...Manoj Pahwa shows up as the only one who cannot do it – he sits on a porcelain throne and pleads with his constipated bowels, “Aaja!” And you wonder if this visual isn’t the perfect metaphor... full review

Thumbs down, by Bobby Singh, Bobby Talks Cinema.com : ...In the second half, David also uses the cult “Dead Body Act” from “Jaane Bhi Do Yaaron”, which again falls flat along with other half baked jokes played for the viewers. ... full review

Thumbs down, by Roshni Mulchandani, Bolly Spice : ...Govinda makes the film worth watching for his great comic-timing and dialogue delivery.... full review

Thumbs down, by Daliya Ghose, Bollywood Mantra : ...Another drawback of the film is the unpleasant music. The music by Nadeem-Shravan was not very ear-soothing.... full review

Thumbs down, by Udita Jhunjhunwala, DNA : ...And what has happened to Sushmita Sen? Dressing her in shapeless sacks cannot cover up the shock of her transformation.... full review

Thumbs down, by Martin D'Souza, Glamsham.com : ...Songs pop up at unexpected turns and you end up feeling bad for the director who gave us a few No. 1 hits. ... full review

Thumbs down, by Gaurav Malani, indiatimes : ...And when Dhawan realizes that the screenplay cannot be stretched any further, all conflicts are conveniently resolved in split-seconds through emotional outbursts... full review

Thumbs down, by Sarita Kanwar, MiD DAY : ...Just watch the episode of 10 Ka Dum which featured Govinda, Riteish and David. It is far more entertaining than the film.... full review

Thumbs down, by Anupama Chopra, NDTV : ...But the unkindest cut is that they have reduced one of Bollywood’s most elegant actresses Sushmita Sen to an overweight eyesore.... full review

Thumbs down, by Ashok Nayak, Now Running.com : ...The outdated situational jokes like the dead body of the detective going around the hotel and some faulty characterizations like the crazy angry ex-boyfriend are a huge turn-off. ... full review

Thumbs down, by Hanumant Bhansali, Radio Sargam : ...one would not like to miss to see two stunning, gorgeous and voluptuous ladies, Lara Dutta and Sushmita Sen in the same film.... full review

Thumbs down, by Sonia Chopra, Sify Movies : ...Extra-marital affairs have been the subject of several of David Dhawan’s films, but a treatment that ODs on infantile sexual innuendos is hardly amusing today.... full review

Thumbs down, by Samiya Shakir, StarBoxOffice : ...It came to a point when you ask yourself who is the worst of the lot as each of the actors are as bad as the next in the film.... full review

Thumbs down, by The ThirdMan, Upper Stall : ...The actors give each other a really tough fight to see who comes out with the worst performance in the film. ... full review

Nothing personal Rahul, but I hope your feeling is wrong :) I think you are with me here, though...

I don't know why govinda is doing these kinda films he has given so many good films...I don't like this one :(

Whatever the review says but I loved this movie I enjoyed it ..