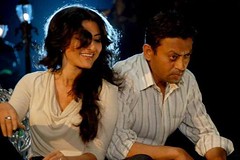 Each life has a story – boring as it may be but there’s a story. Dil Kabaddi chooses 2 couples going through the 2/4-year itch (7 y\ears is way too long) to display the one issue that causes it – boredom. The basic disinterest in what the other finds interesting leads to this boredom. And underneath the boredom, you might chance upon layers of confusion about what one wants from life. All these complexities in a relationship are explored only through the lens of sexuality.

Sexuality is addressed so directly that there’s no room for innuendos. It’s so direct that it is refreshing considering how the topic is taboo in Indian society. And yet it does not shock. You begin discussing your relationship in your head, just as the couple on screen discusses its own when their friends have a fight.

The situations seem very close to urban relationships in real life – simple but complicated because of the need for complications, so satisfied that each one needs its own mix of masala to keep it alive. Or maybe the simplicity and satisfaction are just an illusion behind which the characters have found cozy corners. The movie does get out of a generic Hindi movie’s comfort zone by given each of its women characters an identity of their own and men displaying their insecurity.

Over the period of the two hours, we are fully aware of each character’s sexual needs but don’t get much of a peek into their emotional ones. Their need for companionship, compatible companionship is a given. Something that supposed doesn’t require any explaining. And this is where I was left thirsty. I wanted to know them better, the gray characters that they were. But, I was denied that.

And this despite wonderful portrayal of confusion, frustration, and indecisiveness by all – Irrfan Khan, Soha Ali Khan, Rahul Bose and Konkona Sen Sharma. Together they help maintain the light vein in which the seriousness is handled. Case in example would be Soha Ali Khan thinking of paint colors for her room while in bed with her husband as if she was in an ad with her real-life brother.

The light-heartedness is equally attributed to the background music. Just like the music composer seems to be in love with his ensemble and what he can do with it, I fell in love with the music. As if it were flirting with the mood of the characters without once getting overbearing.

My biggest complaint is the sense of discontent that I leave the theater with. Of course, I’m not asking for back-story, thank goodness they didn’t give any of the characters any. I’m asking to know a little more about the characters – their aspirations not just sexual fantasies, their need for company not just lust. And there was enough room for this since each scene seemed to be stretched to exaggerate the situaion, the camera lingering around a little longer than need be for me to grasp the situation. Even if it is something as interesting as cheating on a spouse.

Extra-marital relationships seem like the flavor of the season. Dil Kabaddi has focused on one aspect of any romantically-inclined relationship, picked 3-4 types of characters of each gender, and mixed them up in different permutations to make perfect soap-opera. Yep, I managed to squeeze all the juice out of various interesting angles that the above medley can have. Now, what if I tell you, the ‘one’ aspect of relationships chosen is ‘sex’? The juice is back, right? Not entirely but enough to make you sit through. Because, it’s interesting to see people make the most of their mundane lives.

Thumbs up, by Ajjaz Hussain, reviews4movies : ...The movie is a must watch for those who are looking for some hearty laughs.... full review

Thumbs up, by Spicezee Bureau, Zee News : ...Irrfan Khan, who plays a self-confessed sex addict, has managed to pull off the character effortlessly.... full review

So-So, by Sanjay Ram, Business of Cinema : ...Call it what you will--copy, inspired or adapted; the truth is this film is a decent fare that is thoroughly enjoyable.... full review

So-So, by Anand Vaishnav, Buzz18 : ...The characters and situations are nothing out of the ordinary.... full review

So-So, by Khalid Mohamed, Hindustan Times : ...Of the cast, newcomer Saba is a find; she acts without any artifice.... full review

So-So, by Gaurav Malani, indiatimes : ...Other than the witty writing, the humour in the film should be credited to the efficient performances of the cast.... full review

So-So, by Amit R Agarwal, merinews : ...IN THIS age of instant gratification who is really your asli Dil Ka Buddy, that is what Dil Kabaddi is all about!... full review

So-So, by Mayank Shekhar, Mumbai Mirror : ...Each individual performance makes up for the evident flaw, and perhaps remains the only reason to enjoy this film.... full review

So-So, by sampurn, real bollywoood : ...Dil Kabaddi fits in and is quiet identifiable for uptown couple’s in the Indian metros.... full review

So-So, by Sukanya Verma, Rediff : ...The actors are mostly bang on and Irrfan walks away with the best moments... full review

So-So, by Filmbear, Upper Stall : ...For a first film, Anil Senior is remarkably assured with his directing.... full review

Thumbs down, by N K Deoshi, Apun Ka Choice : ... It neither gives you ample laughs, nor does it sex you up. And that’s a pity.... full review

Thumbs down, by Martin D'Souza, Glamsham.com : ...Director Anil treads down familiar paths but his weak script lets him down at important halts.... full review

Thumbs down, by Taran Adarsh, IndiaFM : ...DIL KABADDI has no plot as such and debutante director Anil Senior adopts an abstract style of storytelling.... full review

Thumbs down, by Paras Sharma, J.A.M : ...At face value, this may seem like a very ‘forward thinking’ sex comedy... full review

Thumbs down, by Jivraj Burman, Now Running.com : ...The only good thing about the movie is that it has a perfect cast, as all the lead actors fit the respective roles they play.... full review

Thumbs down, by Harshita Kohli, StarBoxOffice : ...Dil Kabaddi is a sorry attempt to remake the English rom-com Husbands and Wives.... full review

Thumbs down, by Nikhat Kazmi, Times of India : ...Get ready for an inside view of urban marital angst where couples live under the same roof.... full review

Yay! Thumbs Up, by Enjoylyrics.com : This one made me wonder too. NO! not about the men and women in my life. About movies and their depe

Yay! Thumbs Up, by Hindilyrics4u.co.un : This one from the house of Yash Raj Fairy Tales is just unacceptable. In the name of women empowerme

So-So, by Lyricswale.com : If only the broad plots had a little more meat. They picked three similar starts, they chose three d

Mita (Soha ali Khan) just can’t handle her husband, Sumit’s (Irrfan Khan’s) unruliness and wild ways. Sumit can’t handle Mita’s prim and properness. Their good friends Konkana Sen Sharma-Rahul Bose are in trouble too, but don’t know it yet. How each one resolves his/her own mid-life crisis is what you are in for.

Ashwini, I actually enjoyed all the performances.

MovieBhakt, really? Movies like these need to be watched just out of curiosity, if nothing else. :)

Irrfan Khan just swept us all away. He overshadowed all the other actors and was miles away.

Though it's a copy of "Husbands and Wives", it's really a well done movie.