A one-tone thriller that doesn’t do much with the initial intrigue it creates. You might or might not predict the climax, but it doesn’t move you much. The performances and a couple of non-standard character choices hold your interest for the run-time.

“A parent is a parent is a parent,” is the prominent thought I am left with after watching Dial 100. Pondering over the purpose of revenge, the consequences of one’s actions—all seem secondary. It all boils down to the parent wanting to do right by their kid, even if their actions are as self-destructive as they can be. Everything else the movie wants to be, revolves around this theme.

Were Manoj Bajpayee and Neena Gupta not holding fort in front of the screen, I don’t know how much of that interest would still be held.

In each case, there are three directions the parent could take. Neena Gupta’s character and her husband can either avenge, let go, or report on a crime. The same goes for Nikhil (Manoj Bajpayee) and his wife. Therefore, only if they took some drastically different step would you be taken aback. While it sticks to that path in the overall story arc, Dial 100 takes some offbeat decisions as far as the characters go.

They do what you and I would most likely do, were we in their situation. The characters fumble. They panic. They try to think of clever ways out that don’t necessarily work out. Unlike characters in films, who outwit the other the first chance they get. This choice will come to me if I ever think about Dial 100 a few days or months from now.

Another plot choice provoked curiosity. At the end of the night in which the film is set, each character broadly has three fates waiting for them: life, death, or life worse than death. But which character gets which end churns the mind for a bit. It surely isn’t a die-throw.

It is for us to conclude that life isn’t fair, even when you are trying to do the right thing. In doing so, we take a cursory glance at the various pegs of the “system” that fail an ordinary citizen—wealth, power, media, and law. Of course, there are other players in real life, but Dial 100 picks on these. 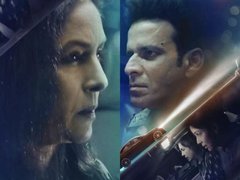 These subtle things that Dial 100 chooses, though, just about hold interest through the length of the film. Were Manoj Bajpayee and Neena Gupta not holding fort in front of the screen, I don’t know how much of that interest would still be held. Because you do notice how physically fit Bajpayee is even before he comments on how oily a samosa is. So, distraction is easy to come by, especially since the film starts out with stereotypical digs on wives and women. The take on people using a suicide threat as an attention-seeking mechanism is problematic too.

Annoying as they were, the WhatsApp-forward type jokes and controversial takes added some texture to the film. Thankfully they fizzle out, but what remains then is a convoluted revenge story trying very hard to be a thriller.

Thumbs up, by Russel D'Silva, Bollywood Life : ...Without stamping its authority as one of Hindi cinema's best cop thrillers, Dial 100 does enough to make its mark as one that can be enjoyed for its performances, empathetic relatability and some pretty good suspenseful moments. I'm going with 3.5 out of 5 stars.... full review

Thumbs up, by Manisha Lakhe, Money Control : ...The final conversation between Neena Gupta and Manoj Bajpayee is quite intense and works, and the end makes you sigh into the darkness. Both Sakshi Tanwar and Manoj Bajpayee prove once again that they can make you weep. You wish the sadness that has enveloped Nikhil when he makes that last call goes away. You realise that the screen has faded to black, and you are hoping they’d pick up that phone call…... full review

Thumbs up, by Sanjana Jhadav, Pinkvilla : ...The film inches towards a decent suspenseful climax forcing the protagonist to put himself in the shoes of the woman whom he's trying to tackle all night. It clearly draws the line between his profession and personal life and forces him to ask himself some difficult questions. While Rensil D'silva's Dial 100 delivers a foreseeable thriller, it's strong performances make this film an interesting watch.... full review

Thumbs up, Scroll.in : ...The performances are uniformly consistent and compelling, whether it’s Manoj Bajpayee, doing double duty as policeman and father, or Sakshi Tanwar as his hapless wife. D’Silva keeps the focus on moving the story forward, delivering a pared-down and clinical film that admirably retains its suspense over 114 minutes and even manages to squeeze in a justification for its vigilante theme.... full review

So-So, by Madhuri V, Filmi Beat : ...Thankfully, the makers have avoided the temptation of inserting any songs in this crime thriller. Resul Pookutty has nothing out of the box to offer in the background score department.... full review

So-So, by Shantanu Ray Chaudhuri, Free Press Journal : ...Even if the filmmakers are aiming for a slow-burn narrative, it only ends up being excruciatingly so. There’s simply not enough spark in the screenplay, and what could have been a thrill-a-minute ride becomes increasingly tedious. It is apparent that the filmmakers are focusing on the atmospherics — the rains, the empty, wet streets reflecting the city lights, and of course, Seema’s mind games with Nikhil. Unfortunately, none of these can overcome the uninspired writing.... full review

So-So, by Shubhra Gupta, indian express : ...When Bajpayee’s stunned face reveals the suppressed turmoil going on inside him, that’s a moment. There are more — when Tanwar breaks down at a climactic point; when Gupta speaks through a mix of heartbreak and tears. ‘Dial 100’ should have added up to much more.... full review

So-So, by Umesh Punwani, koimoi : ...All said and done; Dial 100 is a thriller that brings you to the edge of the seat but doesn’t give you much to be excited about. It drives you to the point where you’d expect unpredictability but gifts you what you already might have guessed.... full review

So-So, by Saibal Chatterjee, NDTV : ...Dial 100 is watchable because of the kind of Manoj Bajpayee acting masterclass that no longer catches us by surprise so accustomed are we to it. He is ably supported by his two key co-actors, Neena Gupta and Sakshi Tanwar, who play two distressed mothers whose paths cross in circumstances that lead to the ill-fated encounter at the heart of the film.... full review

So-So, by Sushmita Sen, NewsBytes : ...One thing that made Dial 100 impressive was its engaging background score. It keeps you hooked till the end, however, you know what's about to happen. While Gupta's performance was decent, it didn't help in saving the movie. Surprisingly, Bajpayee couldn't rescue it either. The suspense element fizzles out after a few scenes, so you can choose to skip this flick.... full review

So-So, by JOGINDER TUTEJA, Planet Bollywood : ...The good part is that the duration of Dial 100 is just 100 minutes and hence there is something happening every minute. As a viewer, you are not tempted to pause the film or check into the cell-phone, which is a good plus point. Moreover, the film has been produced like a feature film instead of being a controlled affair which is usually associated with an OTT film. As a family film with just a cuss word or two and no nudity/violence thrown in, this film can be given a comfortable watch, especially with Manoj Bajpayee making sure that you are glued on.... full review

So-So, by Anita Britto, Spotboye : ...While the story failed to impress, the performances of the actor excelled. Sakshi Tanwar and Neena Gupta both performed wonderful mothers with strong emotional and physical portrayals. Manoj Bajpayee slays his persona as a cop, as he always does. Throughout the film, the actor has been seen as a potential and excellent character... full review

So-So, by Stutee Ghosh, The Quint : ...Nikhil Sood is torn between trying to calm his worried wife (Sakshi Tanwar), discipline his truant son (Svar Kamble ) and respond to the strange queries of Seema (Neena Gupta), the woman who calls on the helpline. While most of the film is clearly a Manoj Bajpayee show, Sakshi Tanwar and Neena Gupta give it their all. Nandu Madhav and Yayendra Bahuguna, despite limited screen time, make each moment count. If only Dial 100 had dialled up the tension and intensity and managed to grip us till the very end it would have been a more powerful thriller.... full review

So-So, by Archika Khurana, Times of India : ...All said, Rensil D'Silva delivers a revenge narrative that mainly relies on performances rather than a promising premise. So, if you are looking for some riveting performances, the trio of Manoj Bajpayee, Neena Gupta, and Sakshi Tanwar is worth your tim... full review

Thumbs down, by Rahul Desai, Film Companion : ...Another issue with Dial 100 is the sound design. I understand the creative license of making the phone calls appear as clean as possible. But it’s a rainy night in Mumbai, she’s calling from her moving car – the least one can do is at least not give her voice the clarity of a voiceover. There’s a bit of city ambience in the background, a bit of road rage, but there’s absolutely no need to get cute and mark the word “accident” with the screech of skidding tyres on the call. This sounds cool on paper, but let’s not overestimate the spirit of the Bollywood flashback. More importantly, let’s not overestimate the concept of crystal-clear cell coverage on Indian streets.... full review

Thumbs down, by Anna MM Vertticad, FirstPost : ...One of the characters in Dial 100 is the spoilt rich kid Yash Mehra who is played by Aman Gandotra, a winner of the television talent show India’s Next Superstars in 2018. In the credits, Yash Mehra is listed as Anant Mehra instead. This casualness speaks volumes for Team Dial 100’s commitment to their work. How can anyone take a film seriously when it takes itself so lightly?... full review

Thumbs down, by Mayank Shekhar, MiD DAY : ...Barring all of the above, let’s just say, you can’t fault the set-up — which is a genre of its own. The reason you stick around though is — what’s this convoluted revenge drama about; or well, what happens next, or eventually? You play that in your head once it’s all over, and wonder if it makes much sense. That’s the payoff. Sorry it’s a serious piss-off!... full review

Thumbs down, by Sukanya Verma, Rediff : ...A solid actor for all seasons, Manoj Bajpayee lends his usual gravitas but eventually seems lost around an insufficiently written character.... full review

Thumbs down, by Shilajit Mitra, the new Indian Express : ...A mention of ‘Tandav Club’ may remind viewers of Manoj’s delirious cop turn in a 2016 short film. He plays them better than anyone, inhabiting their fears and anxieties and flashes of anger. He’s done it so often that Dial 100 – through no fault of its own – seems a bit routine. Neena Gupta toes the revenge thriller line, and you have to turn to Sakshi Tanwar, as Nikhil’s wife, for a more human performance. With such a solid cast, the film could have done so much more.... full review

Dear Meetu, As always excellent review.. I always read your reviews - before I decide to see a movie. Thanks.. I might see this one..!

Raj has given this movie a Want to Watch. Raj has posted 94 comments and has rated 62 movies. See Raj's page for more details.
meeta