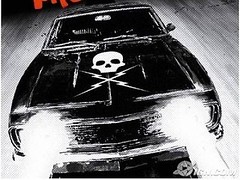 Want to watch the camera graze every inch of a jawline of a very beautiful female character? Want to close your eyes when a scarred, creepy stalker bangs into a car filled with women just for fun? All of this will be coupled in a worn out print with jarring scratches, with jump cuts, jumping god knows how many frames, cheeky background score, colourful, edgy cinematography and you’ll be left wanting to disapparate into a seedy theatre during the 1970s, where you could sit and watch a film like Death Proof with sexual explicitness and violence galore – to awaken your senses.

Just-about-the-right shade of big yellow typeface, familiar names like Sally Menke and Eli Roth, background music that injects a combination of exhilaration and pumped-up-ness – all, ironically, contribute to a comfortable few minutes of the opening credits of a Tarantino film.

You know what you’re in for, with smart, uninhibited layers of homage, film after film. Tarantino will mix up the most ruggedly available genres and serve on a platter to you, a rare delicacy of intelligent, loud, bordering on arrogant (who’s complaining) colourful and intoxicant-coated meaty cinema.

Excuse the jumbled words; it’s all that comes to mind after watching the Grindhouse Series.

Grindhouse is a double feature, with Death Proof directed by Quentin Tarantino and Planet Terror by Robert Rodriguez. The series is a throwback to the 1970s exploitation cinema, with sex, violence and gore as an integral part of the thematic structure. Death Proof has all the regular ingredients: scantily clad, gutsy women, sudden violence, coupled with a quirky and eclectic soundtrack that is a typical Tarantino trademark.

Tarantino’s half features a story around 2 groups of women, one in Austin, Texas and a year later in Lebanon, Tennessee and how they separately battle out a serial killer, Stuntman Mike. Mike stalks beautiful women and brutally murders them in his car. The film follows various conversations of the sassy women and their plans, intercutting with Stuntman Mike’s perspective of the women and their banter.

The pace is distracting; with the slow conversations that require you to observe and listen so you can understand the characters better and heart-in-your-throat car sequences where you can see Stuntman Mike gruel it out with the “powerpuff girls” (Rosario Dawson, Tracie Thoms and Zoe Bell), but it all boils down to a 2 hour experience that entertains in a way that makes you want to be a part of the movie.

The best part about Death Proof are the minute details that make you feel like the only thing missing in your movie watching experience is actually sitting in a theatre during the 1970s, on a deserted American Highway with seedy people beside you. The film includes faux scratches in the worn-out print; deliberately digitized audio wobbles and jump cuts that almost make you sit up, high-contrast cinematography and intervals of film trailers of non-existent movies from the same genre.

Tarantino spends so much time on establishing the characters via long, rapid-fire conversations that you feel like an additional member on the table. You simultaneously want to wing a very heavy shoe at Stuntman Mike, just for being downright creepy.

The DVD has an array of interesting features, including a poster gallery of trailers and posters of movies like Planet Terror, 1408, a documentary feature of stuntmen and women from the film called Stunts on Wheels: The Legendary Drivers of Death Proof, Finding Quentin’s Gals, an interview with Tarantino and his casting options for the film and a snippet on stuntwomen Zoe Bell, who also features in the film.

Contrary to its image, Death Proof is the perfect film for a pajama party night with the girls. With fleeting car actions, tangy background score, in depth exploration of a the dynamics of extreme characters in far-fetched, graphic novel type situations and a mesh of referential paybacks, Death Proof is like an indulgent account of Tarantino’s unabashed ideas sandwiched into a delirious world.

Yay! Thumbs Up, by Ashok : Full of unexpected twists and sudden moves.

Nay! Thumbs Down, by TimELiebe : Tarantino's "magic" just eludes me - dull, talky, even Kurt Russell can't save it.