A Death in the Gunj

Konkona Sensharma's craft seems so heavily influenced by Aparna Sen's that this might as well be her mother's earlier film.

One cannot help but notice how the directorial debuts of both Aparna Sen and Konkona Sensharma demonstrate an affinity towards the remnants of Anglo-Indian life and culture in post-colonial times. The setting of Aparna Sen's 36, Chowringhee Lane (1981) is Calcutta in the early eighties, where an old and lonely Anglo-Indian woman copes with changing times and declining relationships. The backdrop of A Death in the Gunj (2016) is McCluskiegunj, a (real) place in erstwhile Bihar. Gunj, as it is referred to in the film's title, was once a home to 300 Anglo-Indian families, most of who left India after World War II. If Wikipedia is to be believed, descendants of only twenty families still 'remain' in this quaint little idyllic habitat.

It is December 1978 and McCluskiegunj is rustic, unkempt and decaying. The ground is covered with dried leaves. The sky is murky. The daylight is pale. Amidst this ambiance stands an isolated colonial bungalow owned by the Sharmas (played by the charismatic Om Puri and Tanuja). Surrounded by layers of foliage, the Sharma abode is replete with an outhouse, sprawling back and front yards, a couple of verandahs, a fireplace, and many twin-shuttered creaking doors and glass windows. Its teak furniture complements the ceramic, glass and steel cutlery. A washed-out checkered table cloth is spread in between the two, to set them apart. Lit only by dappled sunlight, the rooms might feel a little damp during the day. At night, they glow in tungsten light, while the surroundings remain shrouded in the dark. The spooky setting brings about a sense of foreboding, which the characters only intensify with their youthful but mischievous antics.

At this time i.e. in the December of 1978, the house is crowded with Sharmas' guests -- their children (a young couple with a daughter) and extended family (a nephew, and children's common friends). All adults. Their interpersonal dynamics is unraveled slowly, through playful interactions -- banter and practical jokes, picnics, and lunches, all of which suggest a shared childhood and deep familiarity with each other. 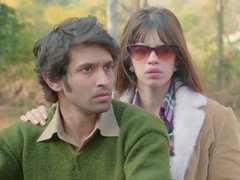 The cinematographer has washed the setting and characters in faint light, thus creating low-contrast visuals, which you will take a while to get used to. But once you do, McCluskiegunj may feel like home. Or at least reminiscent of one. That's the kind of old-world charm it creates. So much so that the place and atmosphere stay in memory longer than the story or the characters.

For me, neither the story, nor the characters create an impact. The characters seem stereotyped. A macho guy, a damsel, a weakling, a bullish elder cousin, a caring maasi, and some more. Kudos to the actors who have embodied them and have played out the quirks as if they were their own. However, in spite of that and even though the focus is largely on character interactions, the costumes, and accessories, facial hair and wigs, sometimes drew too much attention. One cannot help but notice how well or not well is a particular actor carrying the period get-up.

Then, the language – part Bangla, part English that the characters speak, I just couldn't relate to it. It could very well have been entirely in Bengali or in English, but combining both seemed like a feeble effort in capturing the regionality. It felt that not just the film’s setting but the very sensibility informing the film belongs to yesteryears. Of late, achieving a regional flavor by embracing the local dialect has become the mainstay of our films, and many recent films prove it, e.g. Gangs of Wasseypur, Nil Battey Sannata, Haramkhor, Dangal, etc.

The bilingual aspect is also very reminiscent of Aparna Sen's English films. Add to it the grammar of slow unraveling plot, gradual, even if, minuscule increase in tension, and a strongly contrasting peak, almost as if a pebble was thrown in a placid lake, whose waters had only known the ripples caused by the summer breeze, the similarities with Aparna Sen's storytelling increase. All this makes Konkona Sensharma's craft seem so heavily influenced by Aparna Sen's that this might as well be her mother's earlier film, that too sans a tight emotional grip.

From Konkona, I was hoping for a cinematic language that was more outgoing, maybe experimental, but not necessarily confined to the safe zone of constructed realism. Maybe bold, just like the roles she has played. Maybe more ordinary, but more real. But definitely, one that reflected her knowledge of a wider variety of cinema. I also hoped for a story that resonated with current times, something more topical, something that speaks of how she sees the world around her. But then, I also know that if she had done any of these, and had she failed to engross the audience, the critics would have gone after her for not doing justice to the legacy she carries.

Maybe, her future films will carry a sensibility that is neither Sen nor Sharma, only Konkana. For now, what we have got is just old scotch in a new bottle, which is obviously not meant for an audience looking for instant gratification. It takes the time to grow on you. It asks you to sit and watch its effects unfold on you, mulling over with every sip. If this kind of cinema interests you, watch it in theaters. Otherwise wait for its Amazon Prime release, which happens to be its official streaming partner.

A Death in the Gunj - Cast, crew, links