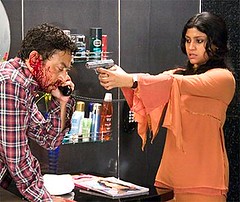 This is a perfect example of how just one department of the movie, that is done well, cannot take the movie home.

Deadline has some really good performances. Konkana Sen Sharma’s act looks so effortlessly done. Her character looks so natural that the viewer forgets that she is in fact acting. Irrfan Khan does yet another grim role with remarkable control. His diction and dialogue delivery is as good as ever. Personally, I would like to see him play a lighter character, before he gets typecast in such parts. Rajit Kapoor and Zakir Hussain do their bit with an apt amount of energy. Sandhya Mridul though, could have done with a little constraint, her expressions and make-up are a tad exaggerated.

The story and its execution are the culprits. The main pre-requisite of a movie of this genre is missing if the audience can guess where the story is going in the first half an hour. The whole experience then becomes agonizingly anti-climatic. If the high point of the movie comes in the first quarter, things that would have been given a cinematic license otherwise, become less tolerable - the extra background score, the weird camera movement, the crooked smirks that say, “I know better than thee”. Then there is the usual list of things that are just plain annoying - the product placement, the melodramatic pauses between lines, the obvious loopholes in the story. The good thing about the movie is that it is short and does not have unnecessary sub-plots.

Same set of actors, similar story, may-be even the same director, but a different screenplay could have made this movie much more watchable.

So-So, by Prema K., Bollyvista.com : ...It makes for a good thriller but in the end it seems like a futile exercise... full review

Thumbs down, by Nikhat Kazmi, Times of India : ...could have been an edge-of-the-seat thriller if its story hadn't been so predictable... full review