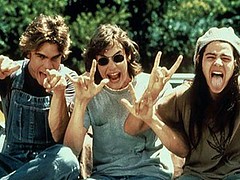 If you’re one of those who think you were born in the wrong decade, and wish to be reborn in the 70s when Marijuana and Led Zeppelin meant life itself, Dazed and Confused will be a treat, especially since the Indian version of a 70s throwback gets as bad as Actionn Replayy. For those of you who feel indifferent to anything remotely 70s, you will enjoy the quirky characters, the background score reminiscent of smooth, bluesy rock and the movie will create a world that definitely has a unique character.

Have you ever wondered what America considered as entertainment before Keeping up with the Kadarshians? Because “American” has become an adjective, let’s try describing a prototype - the many Paris Hiltons? Rock n Roll (with sex and drugs as backing vocals) or the highway diners, each promising the best steak you’ve ever had, where you’re being served by a single mom, during her day job? Still so, “American culture” is a beaten up phrase, being manifested in way too many ways – some desire it, run after it and some make movies about it.

Nashville, The Godfather and Citizen Kane come to mind when we think of quintessentially American movies – either incorporating the American way of life, or discussing political/social changes. Linklater’s 1993 cult film Dazed and Confused doesn’t take on that responsibility – and yet in it’s easy going demeanor it ends up revealing much about America in the 70s.

Dazed and Confused is mostly a nostalgic trip, centering around a few teenagers on their last day of school. It has no structure, no plot, no conflict/resolution but it creates a world, which will allow you – sitting in your Monsoon-ridden state in India – to be a part of the 70s in America.

These kids, played by now very much older actors (Matthew McConaughey, Jason London, Rory Cochran, Adam Goldberg, Milla Jovovich, Michelle Burke), are rebels in the purest meaning known to them back then. They smoke marijuana like it’s their justification for an adolescent confusion; they dress in a hippie-like rejection of anything authoritarian or capitalist and they listen to music with relevantly guised lyrics wrapped in an edgy electric-guitar consciousness.

The movie sifts through scenes and sequences where the regulatory high-school behaviour is depicted – with intensive ragging, sexual and political casualness, and follows the students on their last day as a student. They go through their cannabis-induced grind of easy camaraderie and guilty pleasures – something common for their age. Each teenager’s life is graphed, little by little, as the movie parallels between their individual stories and their relationships with each other.

At some point, as a viewer, you are going to wonder, “what next?” but that’s healthy. Dazed and Confused could also be a rejection of anything structuralist, including your idea that the movie should have something concrete. It might not make up for the lack of flow in the film, but because the movie aptly depicts a decade of American culture that is viewed so nostalgically, the rest is forgiven.

The 2-disc Criterion edition of Dazed and Confused contains audition tapes, several deleted scenes, behind-the scenes-footage, interviews and Kahane Corn's one-hour documentary of the ten-year-reunion of the film's cast and crew. The special features provide ample insight to us initiated viewers about why and how this film gained cult status in the US, over the years.

This entire journey started when I found out Dazed and Confused was on Tarantino’s list of Top 20 films. When you read the synopsis, you wonder how this film made it to a list that includes films like Battle Royale and Memories of Murder. It can be best explained by McConaughey’s dialogue from the film, “That's what I like about these high school girls; I get older, they stay the same age. Yes they do. Yes they do.”