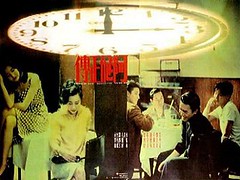 Days of Being Wild

Wong Kar Wai’s ability to rely on a display of mundane day-to-day activities to tell a story makes him a fine auteur. Days of Being Wild is smooth, like whiskey as it slowly paces through your veins. The stories reach you as slowly, and hit you with a bang, while you comprehend every level of the film.

Don’t ever watch a Wong Kar Wai film, if you’re going to text while it plays or pause it periodically. His films are not meant for the passive viewer – and if you still don’t take my advice, you’ll end up with a film that, to you, was an intercutting string of incoherent perspectives. Multiple viewings and a proactive ongoing analysis is necessary to truly enjoy the layers, symbolism and quirks of his narrative.

Being in that kind of a mood, I picked up one of his older films, Days of Being Wild. It’s a convoluted story about multiple characters dealing with longing and rejection. Mostly, we see a set of complex endings of even more complex relationships. We start with Yuddy (Leslie Cheung) a handsome man, who would also be known as a smooth ladies' man.

He manages to move between women, unintentionally breaking their hearts, but we also realize soon enough that this instability stems from the fact that he is an adopted son to a prostitute mother. He salvages the complexities of his oedipal complex by letting his relationships center around him – while they flow, erupt, and tangle. Through this, we enter the world of Su Lizhen (Maggie Cheung) a shy general store worker, who gets most affected by his mannerisms.

She develops a silent, fragile relationship with a local policeman (Andy Lau) as a backup for her broken heart, while we see Yuddy fall in love with a cabaret dancer called Mimi (Carina Lau) – who secretly loves Yuddy’s best friend Zeb (Jacky Cheung). All this is set at the backdrop of Yuddy’s love-hate relationship with his mother.

You may wander to deduce that this string of intricate liaisons originates with the mother-son duo – but soon enough Wong Kar Wai creates a different stream for each story. Days of Being Wild isn’t plot heavy, but the story unfolds as each facet of our characters are revealed. There’s a sense of thematic ambiguity – where Wai doesn’t reveal his choice to portray this particular ensemble of stories – but it’s in this ambiguity that we realize each person is bound by their desire.

Wong Kar Wai’s unique visual approach is evident with Days of Being Wild – he fixates on one scene, one character long enough to establish a narrative. Effortlessly, and with very simple cinematography, he bases his complex thematic structures and characters and lets you as a viewer, live the narrative. His background music, acts as a catalyst in forming a jumbled, kaleidoscopic world in your head.

The DVD of Days of Being Wild has no extras, no features and not even a trailer. It was a bit of a letdown – and this is a recurring trend in all Wong Kar Wai DVDs, where you only get the film. The subtitles options are aplenty, though – Spanish, French, English and Japanese.

Days of Being Wild is charming. It’s not a positive film, and it won’t leave you with particularly simplistic thoughts by the end of it – so be warned. But it’s a charming visual tale, of an assortment of people who deal with basic human emotions in their own personal manner. Watch it not to relate, detach or deduce from the complexities – but just to let the narrative tease your intelligence and play with your head.