Women take centre stage, and how! Unfortunately, the intentionally created queasy feeling in the pit of the stomach stayed too long for me to enjoy the end. In that sense, the film achieves what it sets out to do, making you uneasy.

The cliches spouted by the wife-beater, the victim’s submissiveness, the relentless manipulation by the abuser, the victim’s tip-off point, and her struggle with self—are all relatable even through the quirky pulp-style treatment. Undoubtedly, some of Darlings’ commentary on many a social aspect revolving around domestic abuse will stick in my memory. Yet, the entire do seemed too stretched out for its own good. The abuser’s brutality was too gut-wrenching for too long, for me to enjoy the rest of the film.

The only way in which such banal lines can work, when it characterises the character without normalising the statement or sentiment.

And there is a lot to enjoy. The dark humour does bring enough smiles. Other than the darkness behind them though, the smiles are weighed down by the anticipation of the abuser’s next gruesome act.

Of course, that also means that reality has been depicted well in the film and it has been performed to engage and entertain. And that is what would make me recommend the film. The dose of reality, the successful attempt at giving it a touch of dark humour, and its performances do justice to the consistent character build-up.

Yes, you genuinely care for Badru (Alia Bhatt), weirdly fear Hamza (Vijay Verma), and are amused by Shamsu (Shefali Shah). When the characters and situations build they spark interest. Like even as Hamza spouts one platitude after another, you recall the number of times you have heard it in a different context. The only way in which such banal lines can work, when it characterises the character without normalising the statement or sentiment. And of course, the film tries hard and partially succeeds in allowing the women’s points of view to come to the fore.

Meanwhile, when the build-up is not happening, you shudder at the constant reminders of Hamza’s entitled barbarism, especially when he’s being a doll, like the broken mirror alongside the kitchen wall. But, there is only so much of that you can do. After a point, Darlings feels too long drawn out. 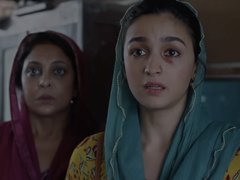 These days, I often suspect, that the last two years have made me incapable of stomaching cruelty on screen. I would like to believe the movies are just well made. Unfortunately, that doesn’t make them any more enjoyable for me.

Thumbs up, by Urmimala Banerjee, Bollywood Life : ...Whatever you might feel about gender equality or flawed laws in the space of domestic abuse, Darlings is a good watch. It is realistic, breezy, emotional and terrifying too. The performances of the main cast is the cherry on top.... full review

Thumbs up, by Devesh Sharma, Filmfare : ...The proceedings take on absurdist hues at times, but that sort of adds to the lure of the film. Watch Darlings for its message and for the fine acting displayed by the entire ensemble class.... full review

Thumbs up, by Madhuri V, Filmi Beat : ...Gulzar's lyrics coupled with Vishal Bhardwaj's music lends different moods to the narrative. However, our pick from the album would be Mika Singh's 'Pleaj' which is all things quirky.... full review

Thumbs up, by Shilajit Mitra, indian express : ...The second half loses some of its edgy focus. Having pushed its characters to a corner, the film struggles to bail them out. Jasmeet appears to be searching for a clean finish, despite the obvious messiness of what’s unfolding onscreen. Certain indulgences, like portraying the cop characters in strictly comic terms, could’ve been avoided. On the whole, though, Darlings entices and thrills, even if I wish the film had gone all out. I wish it had killed its darlings.... full review

Thumbs up, by Mayank Shekhar, MiD DAY : ...This is Bhatt—such an indecipherably instinctive performer, with hardly a social access to parts she pulls off—hot on the high heels of Gangubai Kathiawadi (2022), from Kamathipura, that wasn’t too long after Gully Boy (2019). Making Darlings, in effect, a trilogy of sorts, set in lower-deck Bombay, in Bhatt’s solid, eclectic filmography. If you took out the rappers and their face off from Gully Boy, what would be it if not the story of Murad and Bhatt’s Saifeena, from Kurla. Which is totally the case with Bhatt’s Badru, from Byculla. The two female leads, from a similar community/economic milieu, have only one thing in common though. They’re both fools in love. Something that can go either way. Loved the way Darlings goes—so cathartic!... full review

Thumbs up, by Sameer Ahire, Movie Talkies : ...Speaking of actors, Darlings is a top-notch show. Alia Bhatt proves again why she is one of the finest actresses of her time. She is phenomenal as Badru, and you are going to love the transformation from a cow-natured woman to a tigress. Look at her expressions, shivering and quivering, and you’ll feel it. Watching it on a big screen would have helped a bit, but let’s just forget that for now. The second lady, Shefali Shah, is equally great. Her experience and calibre are so high that she just can’t feel as you assume, and she does exactly that. Most of the dark punches fall at her feet with that impeccable dialogue delivery. Vijay Varma is surely raising the bar with every film, and Darlings is another step on the ladder for him. In the supporting roles, Roshan Mathew, Santosh Juvekar and Vijay Maurya are fantastic. As a whole, the acting unit had a blast, and you’re in for a treat.... full review

Thumbs up, by Saibal Chatterjee, NDTV : ...Darlings, which ploughs a dark furrow all its own while making judicious use of genre elements while shunning standard narrative tropes, is watchable all the way.... full review

Thumbs up, by Avinash Lohana, Pinkvilla : ...Overall, Darlings stays consistent even in the second half, and a few high points scattered periodically in the script keeps you hooked to the narrative. Watch it for the message and the performances.... full review

Thumbs up, by Sukanya Verma, Rediff : ...Though it fumbles on a few occasions, Darlings is a well-rounded effort by Jasmeet K Reen, supported by bold ideas and clever imagery. The movie titles (both belonging to co-producer Red Chillies) playing in a theatre Badru visits in the first and final scene, smartly reiterate the value of Zero over the power of Badla in the hope that no frog needs to bear any scorpion’s burden.... full review

Thumbs up, by Nandini Ramnath, Scroll.in : ...While there are no precedents to Badru’s reinvention, we instantly recognise Varma’s Hamza – vapid, unctuous, monstrous, pathetic. In a narrative that leans in the direction of fantasy, Hamza is the real article. Not for the first time is a film about a late-blooming heroine memorable because of the thorn in her side.... full review

Thumbs up, by Pratikshya Mishra, The Quint : ...Satire is a tough tool and Darlings wields it well. Even though sometimes the satire might not translate and the pacing might wobble, the pros heavily outweigh the cons. The film’s focus remains on being modest and real– for instance, there are no unnecessary redemption arcs. Yet, its vision remains clear till the end.... full review

Thumbs up, by Tanul Thakur, The Wire : ...They carry the film so well that they end up justifying every little thing in it, even its title, which on a considered look doesn’t seem like an endearing grammatical error – a singular noun used as plural – but a collective gratitude from the makers, even the audiences, telling the pair how precious, how important, they are to this smug industry: original performers in the sea of second-handers, the real darlings who can teach the rest of Bollywood what it means to live, to love.... full review

Thumbs up, by Renuka Vyavahare, Times of India : ...Darlings makes a compelling case study on domestic violence but it wouldn’t be what it is, if it wasn’t for Shefali and Alia. Both actresses speak through their eyes and make up for the dreary pace at times with their outstanding performances and chemistry.... full review

So-So, by Bobby Sing, Bobby Talks Cinema.com : ...I certainly wish we soon get to see a Hindi movie deserving loud praises as a film, moving ahead of just being the sum of outstanding performances.... full review

So-So, by Deepa Gahlot, Deepa Gahlot : ...If Darlings is still watchable, it is because the acting is uniformly excellent; Shefali Shah and Alia Bhatt have that rapport that allows them to communicate with their eyes—a mother like Shamsu, who wants her daughter to be rid of that brute of a husband is rare in Hindi films; mostly they are shown telling their daughters to somehow make their marriage work.... full review

So-So, by Tushar P. Joshi, india today : ...Darlings is a film with a message. It touches upon the subject of domestic violence and addiction. Alia and Shefali’s timing and Vijay Varma’s acting save Darlings from becoming just another film with a social message.... full review

So-So, News18.com : ...Darlings might not be the best black comedy out there, but it definitely is worth a watch, especially if you are looking for stories about strong women taking charge of their own lives.... full review

So-So, by Isha Sharma, NewsBytes : ...Darlings is a rousing tale of feminism and will remind you of other female-centric narratives such as Mirch Masala or Lipstick Under My Burkha. It is an ambitious film, evidently so, and swerves between fatal tragedy and witty humor, though not always successfully. Nonetheless, it still remains arresting because although it's Badru's story, it might as well be anyone's story.... full review

So-So, by Anuj Kumar, The Hindu : ...Not bad, but Anubhav Sinha’s Thappad, made on a similar theme, was a more satisfying experience.... full review

Thumbs down, by Devasheesh Pandey, India TV : ...On the positive side, the performances keep us hooked. The shades Alia shows in Darlings have been diplayed in her previous performances too. Nothing extraordinary from the actress, but she gets by. Shefali and Vijay are the show stealers. The latter particularly has a meaty role on his hands and presses ahead in the right manner till the end. Shefali too plays her part to perfection. Her look and mannerisms speak to us in silence and her maturity as an actor does come across. Darlings is let down by its screenplay. The subject, although questionable, has been treated with a progressive eye. But it is far from hard-hitting as it delves into the ordinary like its characters and their environment.... full review