Some outstanding performances and a terrific real life story make Dallas Buyers Club a touching, funny and heart-breaking film. Matthew McConaughey knocks another one out of the park with his convincing performance.

If you've watched The Wolf of Wall Street; if you're hooked on to True Detective, and if you know a little bit about Chris Nolan's upcoming film Interstellar, then you know that Matthew McConaughey is on a bit of a roll. His physical transformations are a wonder in themselves; but what is truly special is how he moulds himself into the quirky but vastly different characters that he does.

In Dallas Buyers Club, McConaughey plays Ron Woodroof, a gruff Texan homophobe who discovers that he has AIDS, and is told by the doctor that, based on his current condition, he has 30 days to live. Woodroof, however, has no plans to kick the bucket so soon; so he decides to take matters into his own hands.

Dallas Buyers Club creeps up on you slowly. It is a stark, disturbing film at times, and oddly charming at others. Ron Woodroof's story is undoubtedly inspiring - a shining example of how just one's attitude and outlook can go such a long way in improving the quality of life. 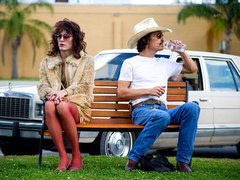 The film is set primarily in the mid-80s, when AIDS was still a mystery, and it was surrounded by a number of myths that have since been debunked. Thus, the film also has plenty of important social messages in it.

It reminds you that life doesn't have to be tragic and restricted if you're affected by HIV or AIDS. Also, watching Ron Woodroof's graph of being absolutely homophobic, one who is appalled by the mere thought of homosexuality, to then ending up having a deep friendship with the unlikeliest of people, his character wins you over every step of the way.

The film's best moments, though, are easily the David and Goliath battle that Ron Woodroof fights with an unfair government agency - which you'll discover in the film. Even though you're not strictly supportive of the moral implications of Woodroof's actions, you support him, because everyone fundamentally identifies with a key driving thought for all of humankind - that everyone has the right to choose their own way of life.

As mentioned earlier, McConaughey's lean look is a wonder indeed, but it isn't a patch on Jared Leto's transformation into the transgender Rayon. In fact, it was only in the close credits that I realized it was him. A brave role and a marvellous effort in slipping in to character, Leto is simple terrific. Jennifer Garner as the kindly doctor who sympathizes with Woodroof is also superb.

We're so used to rooting for white characters, that we tend to forget that we're all actually grey. Dallas Buyers Club reminds us of the fact that in real life, we're all grey, and yet some of us lead lives that are worth living and worth dying for. It entertains you, moves you and educates you, just like that.

Dallas Buyer Club is among my least liked movies of last year oscar nomination for best picture(along with Philomena ).....M not saying that i didnt liked these two movies ,, its just that they are according to me on last two position of most deserving movie for oscar winning....Infact i liked 'Blue Jasmine' more then these two for which Cate Blanchett won best actress in oscar.....wish Blue Jasmine could have been replaced with any one of above two in the nominations.....
But No doubt Matthew McConaughey truly deserved the oscar as best actor for this movie and he got it.....May be now his filmography can boost up a little....

Anup has given this movie a Yay! Thumbs Up(One of the best movie made last year....). Anup has posted 437 comments and has rated 108 movies. See Anup's page for more details.