Another underworld drama, but not minus routine formula. Never really goes past standard romance, copycat events, drained actions, pointless plot, glorified mannerisms, sham production... But if this doesn’t bother you, the film just works for you.

There is a hyper-realistic police encounter in Abhijit Phanse’s brash underworld drama Rege. A top cop slays an innocent in order to mark his century of encounters. There is a similar situation, not entirely though, in Dagdi Chaawl. Albeit, there is a pretty big gulf between the two, the biggest one being the periods both are set in, Rege transcends with relative ease, as a result of our acquaintance with today’s era. Even Hindi crime masterpieces – Satya, Shool or perhaps Ab Tak Chhappan – presumably explain the upper hand, having set and shot in a fairly identical era. Set in the 90s and shot in 2015, Dagdi Chaawl has some serious, periodic-shift issues to address. Recreating the era is by far gruelling, but not unattainable. But it is as much about will, vision, research, writing and execution, as it is about big bucks – or the lack thereof. As goes the rule of thumb, never expect.

In the so-called resurgent times of Marathi cinema, we have makers (like every film industry does) stuck within the confines of popularism. And final results are not dissimilar to Dagdi Chaawl, an ideal world where a middle-class young man is the lone heartthrob in his chawl. Hardworking, educated, supportive, friendly, sincere, he is probably too suave to disagree with. He gets any job done before you even know it. Yes, he can blindfoldedly break matkas as well, good no? But this Mr. Perfect is not new to us, nor is the story of a young, picture-perfect girl relocating to the chawl. This traditional setup obviously bestows him with courtship. Once they mingle, an unexpected conflict (read hackneyed) barges in. Our hero saves her modesty, inviting a bigger conflict (again, hackneyed). Thus begins the fate of his survival and that of the film.

The sorry tale of our films is that they just can’t imagine stuff without the conventional romance. But its dominance here is so much so that the love story alone occupies one third of the runtime. Whoa, wasn’t this film supposed to be about gangster-turned-politician Arun Gawli, if entirely not his biopic? Ankush Chaudhari is leading and ruling (ruining as well) the one-man show, and not Makarand Deshpande as Gawli. Put the infamous aura of Gawli and his Dagdi Chawl out, you witness another tasteless attempt at crime genre. Having little to do with these characters, what’s the significance of the title then? Yet, it seems to be paying off when you see fellow audiences whistle and clap to Daddy’s well-coined swags. 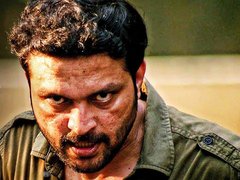 Notorious and menacing in the 80s-90s, Daddy and his gang appear as a shadow of themselves in the film. The self-styled evil force looks nerveless and ready-made. Deshpande, being a highly gifted performer, impresses a bit. I don’t blame him once he fails, though. Chaudhari’s wisdom, on the contrary, poses a big question as he gets entangled. He is the saviour for people around him, but not himself. He has solutions up his sleeves for any given situation, but not his own dilemmas. But that said, when a star is essaying the role, what’s the nuisance of character writing for? Nobody is going to notice that just like the middle-class heroine’s designer wears and loud makeup.

There seems to be a dearth of novelty in storytelling. Exploring beyond voice-overs and flashbacks is rarity these days. This film, though, takes the writing laziness to a new level. Events bring no real thrills. Flashbacks after flashbacks add no dimension to the narrative. Set pattern of revealing mysteries instead lays bare the shortage of ideas. And don’t get swayed by some clap-worthy, funny moments. That’s a first-rate addition, but doesn’t let me ignore the inadequacies. Admirable on the face of it, the production or visual treatment negate what the setting truly calls for. Despite that, the appearance is most likely to blot out the failings. Whether that is makers’ sole triumph (?) or our ignorance, the job is done already.

Gawli is no Sarkaar. But that doesn’t make him a weakened cinematic persona. The intensity this character brings forth can put many fictional gangsters to shame. You perhaps don’t need to get his looks right as done in the latest disaster. But getting his aura and the period spot on is far more ambitious. The hope is that this does happen someday. RGV, you listening?

Yay! Thumbs Up, by Rahul satpute

Ankush really rocked . great team overall with good product. This review above is like by saddist .very pessimistic approach he was if we read his other reviews too ..may be to create self importance