A spinoff (and chronologically, a prequel) of James Wan's The Conjuring, Annabelle, directed by John R. Leonetti, is a weak horror film. Apart from a couple of startling moments, the film follows an uninspiring graph that doesn't have even a fraction of the thrilling heft that one would expect when making a follow-up to a James Wan film.

There is a fundamental problem with Annabelle. The eponymous doll that stares down at you from the posters of the film, (which, if you remember, made a small appearance in James Wan's excellent The Conjuring, is creepy as hell. There seems to be no logical reason why a sane person would, of their own will, keep such an ugly thing in their home, particularly when there's a baby on the way. I'm not talking supernatural, here. I'm just talking plain aesthetics.

Either way, once you move past that little hitch, you really want to be wowed by a film like Annabelle. It has all the staples that go into an engaging horror film - a beautiful young couple, an adorable baby, and that excruciatingly hideous doll. But, a handful of moments apart, the film is rather bland.

The problem lies mostly in the mild, tempered manner in which the characters and their woes have been written. Despite her classical good looks, the lead actress (whose name, curiously, is also Annabelle,) - the primary subject of the haunting - has a flat, one-note and predictable character. Same goes for her husband, an annoyingly supportive fellow who never seems to take a step that's against his wife's wishes. Now I don't encourage disobeying one's wife, but some amount of conflict in their relationship would have done the film a world of good. It would have put something at stake apart from the obvious. 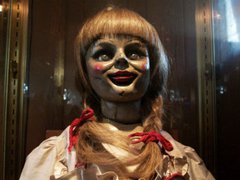 Instead, they are a sincere, god-fearing and hard-working pair that no one would ever wish to harm. They're so perfect that even at the most depressing points in the film, you feel quite sure that nothing bad can happen to them. The haunting of Annabelle, the doll is also written in a slipshod, unconvincing manner.

The scares themselves are also mostly unimaginative. They seem to follow a checklist of sorts, making them almost always predictable from a mile away. In fact, this is usually my biggest grouse with horror films - the moments that are meant to scare you are very rarely organic, derived from the plot and setting. They rely more on startling the audience, than on building a sense of foreboding and that tingling of the nerves.

Another aspect where this film misses out is on the sense of time and place. Annabelle is set before the events of The Conjuring, which itself was set in the late 60s. However, unlike the latter, which was so consumed in its period that it drew you in, Annabelle seems to hardly ever feel authentic and true to its period. It hurts the film at a subtle level.

What you're left with, then, are conflict and resolution - both of which are rather tame, never once causing thrill. Seasoned cinematographer John R. Leonetti, who has shot a number of James Wan's films, is the director of Annabelle. While he certainly has considerable experience lighting and shooting horror, his direction is at best functional, never once seizing on the openings for genuine horror that the script provides him.

Though, to be fair, at least a few moments in the film are crafted well enough to cause the more weak-bladdered members of the audience to soil their pants. For the most, however, Annabelle is just horror-lite. The film would work better as a primer for those who've never had the liver for horror, than for a toughened horror film fanatic.

Was not expecting anything like The Conjuring but at least it could have been upto the level of Incedious but your reviews plus most of the reviews in METACRITICS tells its disappointing....Gonna skip it this week and watch it at home.....

Anup has given this movie a Not Interested in Watching. Anup has posted 437 comments and has rated 108 movies. See Anup's page for more details.
Anup

Please review GONE GIRL when u got the chance to watch it,,,,i have been eagerly waiting for it....As David Fincher is my second most favorite director after Christopher Nolan.....And crime thriller drama is my favorite genre and i think David Fincher is the best director to direct movies in this genre in present Hollywood even better choice as compared to Christopher Nolan....

Anup has given this movie a Not Interested in Watching. Anup has posted 437 comments and has rated 108 movies. See Anup's page for more details.
Anup

Anup has given this movie a Not Interested in Watching. Anup has posted 437 comments and has rated 108 movies. See Anup's page for more details.