Remember those Bollywood-styled, clichéd friendship films? This one is no different.

“This one will be another Duniyadari. I am telling you,” smirked a man sitting next to me at his friend. As the screening of Classmates began, I couldn’t stop myself linking both the films at more than a few instances. I on’t know if that guy was some astrologer or was well-versed with the films of similar genre (I smell the latter). Such a prediction may hardly surprise you; given the kind of films our industry is famous for making. Well, in a broad sense, Classmates is no way a Duniyadari spin-off; but comparisons are highly inevitable.

Classmates is an official remake of 2006 Malayalam film of the same name. The original is said to be a trendsetter in the Kerala film industry. If its success can be replicated in Tamil and Telugu as well, then why not in Marathi? Remakes of films from the south are all the rage in Bollywood and Marathi industry also seems to be following suit. Not that I’m anti remakes; eventually all that matters is entertainment. But not at the cost of logic. The latest remake is filled with all possible, formulaic elements that are considered as the principle foundations of college-life films. This leaves you neither surprised nor wanting for more.

A group of college students who stay out of class more than in, spends a large amount of time cracking jokes, dropping one-liners, riding bikes, dancing to the tunes of lip-synching songs or scuffling around. Enter romance, undying friendships and, most prominently, and college elections. This dramatic time actually unfolds through the old memories of these students (now ex) gathered at their reunion. Having seen multitude films set in the 90s (or even prior to that); I don’t want to pick apart these ingredients, no matter how superficial they seem to me. 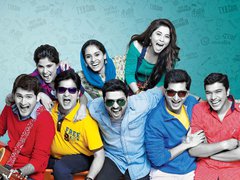 As the narrative jumps between past and present, the only visible difference is makeup and costumes. The visual treatment of the past story is so fancy that it barely reminisces the 90s era. The production sorely misses the point here.

The film largely deals with political disputes interlaced with suspense and plentiful action. Some of its moments are blatant, while some (the one right before the interval or the one that leads to climax) are simply masterstroke. You know where the story is headed to. Yet; Classmates gets increasingly intriguing post interval, one reason being correctly placed conflicts.

On the contrary, the sequence – that interrelates the past and present – casting doubts on intentions - the way it is written or even executed makes the film appear as a murder thriller. Nothing wrong about that as long as it gels well with the storytelling. But if the whole aim is to make a feel-good film, then why forcibly inject things just to create suspense? This one is totally needless and is a lame effort. Unnecessarily stretched out runtime is a big disappointment too. A cleverly edited first half could have surely saved a few yawns.

I must say, Ankush Chaudhari is a master performer. He once essays the role of a college heartthrob and then seamlessly gets into the character of a lost man. Though his character is another repetition of Duniyadari, he impresses throughout. Classmates, riddled with several narrative flaws, is actually made worth watching by its talented cast (look out for Pallavi Patil and Siddharth Chandekar).

As I write this piece, the one thing that refuses to leave my mind is the film’s background score. It reminds me of my personal favorite, The Dark Knight-themed score.

In Classmates, Ankush’s character addresses not-so-good things as ‘small aahe (it’s small)’ or quality as ‘darja’. His delivery makes these words sound really intense. Ironically, all the efforts fed away in the end and the picture turns as dull as it could get. Small aahe!

The main reason the original Malayalam version worked was for the excellent right/left political angle. Anyone who had passed from a college in Kerala few years back could identify well with the campus politics and it invokes nostalgia.
It was the highest grossing Malayalam movie at that time and also a trendsetter, it did trigger of a series of Alumni get togethers in colleges.
Dont think it was well recieved in Tamil/Telugu.

JJ has given this movie a Not Interested in Watching. JJ has posted 48 comments and has rated 20 movies. See JJ's page for more details.
Abhishek Gosavi

@JJ: Agreed. But I'm told that the Tamil and Telugu remakes were blockbusters. I've idea of none in terms of quality.