The infusion of a social message into the story goes haywire, and doesn't looks appealing either. Moreover, it tries really hard to create drama through dialogue that lacks much-needed intensity.

There seems to some sort of desperate urge among producers to attempt unexplored genres in Marathi cinema of late. It is perhaps a safe bet for them. And if the subject is about sex, who is unwilling to back it? After all, such projects receive an unprecedented amount of publicity to begin with and guarantee at least return on investment in due course. Majority of them are purely box office-oriented, while few try to be remarkably different. In an endeavor to kill two birds with one stone, Chitrafit - 3.0 Megapixel ends up performing so badly that it neither appears money-making nor distinctive.

The film is about victims of the illegal trade of filming and circulating sexually explicit videos or MMS. Writer-director Divakar Ghodake chooses to narrate the story through the eyes of a researcher during her visit to Pareni tribes. So he sets off the drama with the protagonist’s voiceover and this is where the film begins to falter. I fail to understand why her voiceover keeps telling you the story through the viewpoints of other characters as well.

The mix-up of this touching tale with a socially-ingrained message is actually the biggest cause of its failure. The lack of emotional touch to the voiceover makes you wonder if the narrator really has any heart-wrenching story to tell or is just interested in making social commentary. As the film advances, this voiceover hardly creates any suspense and instead serves you spoilers throughout. 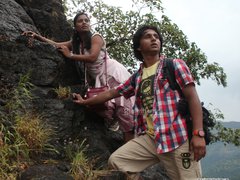 As you must have guessed by now, Chitrafit - 3.0 Megapixel is actually the name of a MMS video (meaning a film clip shot on 3.0 MP camera). This video clip interestingly opens up with a message – “The whole event was scripted”. Appallingly, this event was scripted so shoddily that it cannot be categorized either as a film or a sex video. If the aim was to capture emotional turmoil of sexually-exploited women, the film is filled with multi-layered, confusing elements. And if the aim was to make a sex-driven film, it fails miserably.

The film documents a real-life incidence that shocked rural Maharashtra few years ago, and so it is understandably set in the state’s scenic ghats. A few minutes into the film, you start wondering if you are actually witnessing some National Geographic program about picturesque Western Ghats. Stunning cold frames don’t add any value to the story however.

In Love Sex Aur Dhoka, Dibakar Banerjee had planted cameras into his stories masterfully (except in an aspiring director’s one) – letting the camera narrate the film creatively and engagingly. In Chitrafit - 3.0 Megapixel, camera’s perspective (a mobile phone camera) is hardly used. Flashbacks or voiceover do little to help lay out the tale. The makers possibly didn’t want to create another LSD, and this is logical too. But a better use of camera’s viewpoint would have at least stopped the film from being so predictable.

Camera angles in the first MMS clip surely raise questions. If the camera is placed on ground, how in the world a high-angle shot is even filmed at an isolated place? Not only camera placements but also overall execution tells you a lot about the director’s carelessness about researching the subject. Not to mention well-composed, but ruthlessly used musical pieces.

Foreplay scenes are way too superficial and poorly choreographed, while videos themselves look aesthetically gorgeous – missing the realistic punch.

At just 84 minutes; this film has shorter runtime than Dhobi Ghat, still it comes with an interval. Even so, a better edit could have easily cut it down to an hour or so, eventually making this predictable film far more engaging.

Ghodake has apparently been credited in several Oscar-winning films for VFX and computer graphics. Fake-looking newspapers or camera lens in his directorial debut however create doubts.

If you’re out there to witness some story, you’ll be disappointed from the very beginning. And if you want to see it just for sex, you will regret watching it till the end.