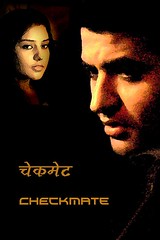 An interesting premise, an interesting narrative style loses fizz due to lack of dynamism in overall execution.

The plot twists in Checkmate indeed make your grey cells twist and turn as they would in a game of chess. Unfortunately, the events develop at a pace that unplugs you instead of getting you hooked. Also, since the non-linear narration is not from any particular point of view, the twists seem random and all over the place. This makes the non-linearity itself rather haphazard.

The base story takes its own time to formulate and settle down. On the way it develops the main characters' frustration with their situation. However, the different traits of these characters are not given full vent. And thus, the initial character development seems in vain. Unfortunately, yet again, the only way a woman can achieve anything is by using her sexuality, however intelligent she is. The actors playing these characters also give no earth-shattering performances, but neither does any one of them make you pull your hair apart. Each one is just doing his/her bit.

The voiceover narrative style used throughout the movie gives the feel of watching a choppy chain of events rather than a story flowing from one plot into another. However, it was a nice touch to have the voiceovers pass judgments about other characters also, rather than just narrating the story.

My basic problem is with the pace of the movie. A thriller has to be on the move. It cannot pause to take a breather; it cannot stop on seashores just because. A pause has to be about something, it has to be pregnant, has to do something via the background music or the camerawork. But here the pauses just exist because the director thinks he is building suspense. Nope...tedium he is surely building.

Three men lose money in a scam. They want revenge. But its not that easy now, is it?

to make up for no new releases this week? :)

Thanks Surendra More, for pointing out what you liked about the movie!