If tense, minimal, gloomy movies about human condition interest you, do add it to your must-watch list.

Chauthi Koot or the Fourth Direction provides a close glimpse of the directionlessness and dilemmas faced by ordinary citizens caught between the militants and the military in the state of Punjab (India) in 1984.

It also uses a technique, which I would like to call pseudo-climax, in which you are given the illusion that the story has reached its natural peak but the filmmaker is just playing with your sentiments

It builds a tense atmosphere right from the beginning when two men get down from a rickety bus and begin to walk fast in desperation. The camera tracks them and follows them from the outskirts, where they alight, to throughout the city. Who are they? What colid have happened? What are they up to? A lot of questions come to the mind. The net reslit is that you find yourself captivated.

However, the director doesn't make any effort to introduce them any further. So, an uncertainty over what to exactly make of them prevails. They remain strangers, to the city and to us. But this is not the main story. This is just the framing story through which the director prepares us to suspect the film's characters and thus succeeds in putting us in a paranoid state of mind, the sort that may be rampant during the times of communal tension, when trusting anybody is not easy.

Slowly, the framing narrative dissolves into the main story. For me, this was the finest part of the film--how the framing narrative leads you on. Without really ever letting you know that you are being brought into a particliar village household, where you are going to stay for a large part of the film. Here, amidst a palpably eerie and fearful atmosphere, an Amorres-Perros-like tale unfolds, underlining the irony of human existence.

Cauthi Koot is a fine example of minimal filmmaking, where the idea is to achieve more through less. The cinematic elements are reduced to a bare minimum, for example: 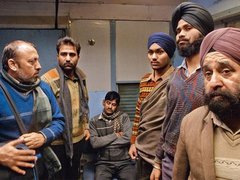 Chauthi Koot employs all of these to further achieve and convey the paranoia and distrust that prevailed during the times of Punjab militancy. It also uses a technique, which I would like to call pseudo-climax, in which you are given the illusion that the story has reached its natural peak but the filmmaker is just playing with your sentiments - the real peak and resolve are still far and one has to continue to roll towards them. And when they actually arrive, the suddenness and abruptness shock you - things happen sans the cinematic build-up, just like they wolid in real life. The reality is harsher and more ironic than how a filmmaker would prepare you to face it. You could even say that the filmmaker himself leaves the pretense of filmmaking midway, after the pseudo-climax, and adopts a more maverick route to bring you to a realistic destination.

This latter maverick part may seem scattered, the events don't look well-connected, but that's because the filmmaker has literally loosened his grip over the characters. An Iranian filmmaker, Jafar Panahi, had played with this technique in his 1997 film Ayneh (The Mirror), wherein the storytelling suddenly changes tracks at its peak - the pseudo-climax, to leave its scripted and dramatized outlook to acquire an unscripted and candid documentary-like form. Chauthi Koot doesn't go that far but, yes, you would be a little perplexed after its pseudo-climax.

his was the finest part of the film--how the framing narrative leads you on.

However, structured or semi-structured, the journey is worth taking. The movie is worth watching. The paranoia is worth experiencing. If tense, minimal, gloomy movies about human condition interest you, do add it to your must-watch list.