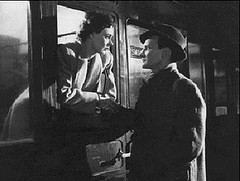 Brief Encounter is a classic British romance by David Lean, the director of big screen mammoths like Lawrence of Arabia, Doctor Zhivago and The Bridge of The River Kwai. This film however has a far simpler plot though - of a chance meeting between a married woman and a doctor, which turns into a full blown love affair. Highly recommended for its Billy Wilder-ish narrative, and Celia Johnson’s performance. Winner of the Grand Prize at Cannes, and nominated for Best Actress, Director and Screenplay at the Oscars.

Know that feeling when you’re about to bid farewell to someone? You’ve got the flow sorted in your head - you will probably hug, look into each other’s eyes, maybe even kiss, make promises that you will call, upload pictures.... and then suddenly someone - maybe a common friend - pops on the scene and spoils the moment, spoils the entire plan that you had in your head.

Lovers Laura (Celia Johnson) and Dr. Alec (Trevor Howard) are about to bid farewell to each other, for good. And the moment is spoiled by a rather chatty and intrusive Dolly (Everley Gregg), familiar to Laura. It’s tragic and when all Alec is able to do is gentle press Laura’s shoulder to offer her comfort, your heart reaches out to them.

You however realise the complete nuisance and magnitude of Dolly’s intrusion only by the end of the film. By that time, you’ve seen Laura retreating into a shell of her thoughts, sitting in front of her husband, imagining the brief affair with Alec and narrating an imaginary confession of sorts, detailing how they met, where they went, what they did and how she felt through all this.

An extra-marital affair, borne out of a stable, happy marriage is a bad thing. But here’s where Laura still managed to win sympathy - the honesty with which she explains her predicament, is touching. You realise that before she could know the social impossibility of her affair, Laura and Alec have fallen in love out of pure innocence. What I found even more convincing was the manner in which they fall in love - no stunts, no songs, just a few cups of tea, hanging out together and a rather engaging conversation after, Laura finds herself absorbed in his eyes.

A big question popped up in my head though - and it’s a trick which women in cinema have fallen for (reminded me of Billy Wilder’s The Apartment especially). When you and a woman you know are coincidentally going for the same show for a movie, is she ever going to be impolite and say, ‘I’m alone, I’ve got a balcony seat, and I hope we’re not sitting together.’? Her politeness on the contrary is where she gives in and the man takes the bait and the rest is history. Something similar happens in Brief Encounter. Laughing together looking in the same direction, can produce some strange signals between a man and woman.

I’m a big fan of using restraint in films. In Brief Encounter, I liked the way David Lean never made the two lovers go over the top - their romance is a subtle, restrained and completely self-aware of it’s wrong-doing (a momentary kiss is halted by shadows of people). If this film was re-made today, it would break all forms of explicitness.

An interesting parallel I observed was that between Laura’s family life and her meeting Alec. The first time she goes out with Alec, she returns home to find her son unwell. It’s a gentle sign, but worthy enough to indicate disapproval of the scheme of things. My favourite metaphor in the film was how Noel Coward’s screenplay begins Laura and Alec’s relationship - minutes before they bump into each other, Laura is troubled by a speck of dust in her eye. The Hindi phrase ‘aankhon mein dhool jhonkhna’ being used as a symbol to start an illegit affair - nice touch, Mr Coward!

At 86 minutes, Brief Encounter lives up to its title. It’s an engaging watch, filled with great lines, classic romantic moments and a performance by Celia Johnson that’s worthy of the Oscar nomination she received.

Yay! Thumbs Up, by Brief Encounter : A masterpiece