Poetry’s transitioned to film - worth watching, but this one offers no scope for true storytelling.

Four directors. Four poets. Four shorts. One movie. Anthology. A rarely-entered territory. Poetry’s reincarnation as a film. A never-done-before, ambitious experiment. A new beginning... Don’t let such publicity ploys hinder your movie-watching experience. A film is a film, irrespective of whether it’s a compilation of short films or is adapted from one form to another. It is still supposed to engage you. No matter how simple they sound, we need better ways to recite tales and not some new form alone. As far as Bioscope is concerned, it isn't a bad experiment. But it doesn't experiment with the narrative.

Poetry itself is such that its adaptation into some other form, say films, leads to abstraction all around. This is where Bioscope impresses through its clear-cut notion, with poetry as its backbone. Be it a 'ghazhal' singer’s declining state in Dil-E-Nadan or a broke, but gritty farmer in Bail or a guy’s emotional conflict with his dark complexion in Ek Hota Kau or a young lady struggling with her sexuality in Mitraa, you instantly feel emotional touch in each.

Straightforward on the face of it, each story comes with a unique voice, even as the lyrical voiceover plays along. But then, the whole point goes off the mark in conveying the echoes of these characters believably. 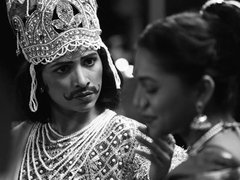 Interpreted from Mirza Galib’s verses, Dil-E-Nadan reminisces a sorry tale of diminishing 'gharana' music. Draped in rich, elaborate setting, it comes loaded with a lot of detailing and a strong inner voice. Now with no plot development, except in the end, everything is fed through forced dialogue. Nothing wrong with your dialogue telling the story, but it is when only dialogue is doing so. But being a Gajendra Ahire film, I am not surprised. This man seems to shoot his films even before an idea is fully conceived, without worrying about the perils. As this short switches between Marathi, strongly-worded Urdu and Hindi, I wish I could turn off the audio. Very pretentious.

Then comes the long-standing tale of our stigma with dark skin, Ek Hota Kau. In this brilliantly acted and poorly shot short, the link between the character and a crow is the real highlight. And so is the sound design that tries to take you into the protagonist’s turbulent mind. Saumitra’s ode is just fabulous to say the least. Nothing particular happens in terms of writing here. The human conflict intrigues nonetheless. This is a simple love story and needs no more than a simple treatment. Yet, you see GoPro-esque visuals showing off technical know-how.

Loknath Yashwant’s Bail talks about an animal’s displeasure, and it sounds promising. The moment it is adapted into this Girish Mohite short, it goes haywire. Whose viewpoint is being construed - the animal or the director? In any case, I couldn’t connect with any of them – except the poetry itself. The outburst of this cotton farmer makes Bail a standard, formula film. I understand the never-ending plight of farmers, or maybe I don’t. But this needlessly dramatic portrayal doesn’t win my empathy. Easily the most forgettable in the lot, Bail goes wrong in every department.

If you hate all of the above, no worries. The best is saved for the last. The differentiating factor in Ravi Jadhav’s Mitraa is that unlike the others, it’s not just a social film. It presents a stark picture of things you know already just like the rest of the shorts. But its beauty is that the story begins with the audio of Nehru’s ‘Tryst with Destiny’ speech. I would let you figure out what it means to Sumitra and her world. One may overlook this symbolic detailing over the course until a message rolls in the end. But, there is no hastiness to be showy. Commendable effort on Jadhav’s part this time. And he doesn’t just wondrously account Sandeep Khare’s poem, but Vijay Tendulkar’s short story too.

When such short stories with uneven qualities are packaged together into a feature, I start to have serious doubts about its purpose. A supposed, new direction actually lacks directional firepower. May be we will have Chaitanya Tamhane, Avinash Arun, Nagraj Manjule or Umesh Kulkarni changing that trend in the next experiment. Who knows? By the way, Kulkarni is coming up with his own experiment next week. Wow!