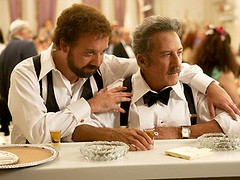 Barney’s Version is feel-good, funny, tragic, mushy and sometimes dramatic. That’s how life is, and Barney’s life is nothing different. You know all that talk about good, meaningful cinema one can identify with? Well, this is it. Director Richard Lewis seems in complete charge of handling a variety of genres and Golden Globe winner Paul Giamatti’s performance in the title role is good enough reason for you to watch it before it runs out of cinemas.

Paul Giamatti’s face and features usually land him only comic roles. This is his coming of age film, where he transitions from comic actor to someone who can deliver so much more, with extreme maturity.

Although the title may not suggest it to be, Barney’s Version is romantic in parts, a memoir in some and a witty comedy while it lasts. It’s a breezy, nostalgic ride through the life of the Jew, Barney Pagnofsky, a television producer of amateur dramas, who reflects on his life’s highs and lows, love gained and lost, at a time, when he is grappling with Alzheimer’s.

The film begins with shades of a comedy and you can’t help avoid that thought, looking at Giamatti’s face. But soon you realise that director Richard J Lewis does not draw caricatures with his characters. That’s the biggest strength of this film - just when you think the situation is hinting itself to going down the comic highway, the screenplay pulls the brakes right there.

Dustin Hoffman, who plays Barney’s father, a retired detective adds much of the colour to the proceedings (the ‘meet-your-parents’ dinner, Barney’s wedding and the cemetery scenes are memorable), but he never forces his wit into conversations. Instead he and Barney are seen confronting life’s challenges with a pinch of salt. That’s the kind of father, one would love to have.

What begins to look like a memoir, ultimately lands up in the alleys of mush, head-over-heels romance, marriage and raising up kids. It’s not exactly what I expected out of the film, but not something I’d mind. By keeping the focus of the film on the most important part of his life, marriage - the screenplay does find a focus. Barney’s story of falling in love again is one of the cutest chapters in this film. Miriam (Rosamund Pike) is perfect as Barney’s companion and her character, as that of an understanding wife (but only up to a point) is essayed very well in the screenplay.

This is clearly Giamatti’s best performance. He has undergone some very meticulous make-up (especially his beard) to portray different periods of his life and at each stage, he seems wonderful in character. I felt my mouth open in shock, in a crucial outburst scene. What makes him stand-out and easy to identify with, is because in totality, Barney is just like one of us - sometimes he goes the extra length to achieve things, sometimes he is insecure, he drinks a bit too much alright, but he is truthful. He does make mistakes and he regrets them later. Sometimes he is lucky and sometime he gets nailed.

Not only does the direction help bring out those shades beautifully, some wonderful editing (Susan Shipton) helps. The fade-ins and dissolves seem so neat and trimmed, they are perfect finishes to every small chapter in the film.

It’s a pity that this film will sink without a trace thanks to poor publicity. It’s got acclaim at film festivals and award shows, but Golden Globe winner Paul Giamatti is not exactly a household name amongst Indian audiences.

Expect day shows to be cancelled in most multiplexes, because very few people will turn up. In order for that not to happen, I recommend to go and watch this one! You’ll enjoy Barney’s life story.