A tried-and-tested formula laced with mind-numbing efforts. Nothing to write home about.

Edward Dmytryk once said, "In art, the obvious is a sin." Director Atul Kale probably doesn’t understand what it really means. Had that not been the case, Balkadu wouldn’t have seen the light of day. But now that this film is released, and you are in the theater you have no other option but to suffer the fruits of his sins. To put it in even simpler words – Kale falls into that brigade of directors who have no idea of anything, let alone making a film.

Balkadu is an outright propaganda-driven film. Well, this is no big news to you (considering it is the lone reason the film exists) and nothing is flawed about that either. Take any well-made propaganda film for an instance; an intriguing narrative is woven around its one-sided, ideological message. It misleads you without even letting you know about it. And that’s the beauty of writing, something the film’s writers bluntly overlook in every single moment. But does it have at least something to brag about? A big no, unfortunately.

Balkrushna Patil, who left Bombay in his teens to live in a less expensive locality – Nala Sopara, teaches history at an English-medium school that doesn’t look like one. He hears voices of several Indian freedom fighters and political leaders. He sees a psychiatrist to beat this trouble, but one of the voices refuses to go away. All the unbelievable thereby starts happening. The voiceover of late Balasaheb Thackeray helps this underdog overcome his fears and stand against our corrupt system. 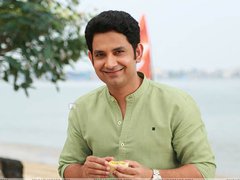 Sounds familiar? Oh yes, it does. The film takes cues heavily from Me Shivajiraje Bhosale Boltoy, or sometimes even Lage Raho Munnabhai. Chhatrapati Shivaji Maharaj and Mahatma Gandhi come alive in the aforesaid, respective films; while here Balasaheb’s voiceover (the only apparent difference) single-handedly guides a common man do the impossible. Balkadu, regrettably, appears to be a ditto copycat of Me Shivajiraje Bhosale Boltoy in many ways the film ends up being ludicrous tough. What annoys me more is that Kale is seldom bothered with putting any effort to recite the same story a little differently.

The makers definitely seemed to be in the mood of making things more impactful than meaningful. Okay, one can excuse logic for the sake of story. This film, however, has none. Just like Balasaheb’s stiff but rib-tickling words, the film boasts some really powerful dialogues at times. He was considered as the man who says what he thought and does what he says. Being based on his ideologies, the film’s story (if there’s any) could have at least acted in a similar way. The outcome is rather otherwise. Because the words need the backing of action, right? Yet I have to admit this, well-timed (although excessively used) comedy is the only saving grace of this haplessly mediocre film. Irrespective of whether you agree or disagree with the portrayal of pro-Marathi agenda in Balkadu.

The camerawork is something you can’t forgive anytime soon. This film is about Bombay and it fails to capture the core elements that truly define the city. It instead focuses on pointless things, just as the film’s editing or production do.

I feel, I was needlessly harsh about Umesh Kamat’s casting after seeing Balkadu’s trailer. Yes; he does go a little over-the-top, yet he manages a decent job.

Balkadu has everything that can be termed as superficial; even so most of the theatre was laughing, clapping or whistling at regular intervals. This reminds me of Singham. Audiences always go gaga about underdogs shaking the system. If you root for such underdogs or stand by Balasaheb’s philosophy, chances are high that you already love the film.