A potentially powerful idea that lacks vision and execution.

Almost every character in this film has some sort of past connection with Baji, a superhero vigilante. But the manner in which all the characters are written or even presented, the film appears to be lacking enough conviction to create a long-lasting impact. Baji definitely had every potential to be one of the finest films of the year so far, yet it comes across as a dim-witted one – leaving you in a state of sulky dissatisfaction.

Easily one of those films that are big on a strong idea, Baji falls short of enough strong voice to invoke your emotions or keep you engrossed throughout. Having impressed in his debut feature Pune 52, I was very curious to see what director Nikhil Mahajan does next. And Baji’s promising trailer added to my mounting expectations. While I wasn’t hoping for an out-and-out superhero film, I surely thought Baji would push the envelope at least in terms of storytelling. But never in my wildest dreams did I imagine it would pave the way to mediocrity.

The film is about an 11th-century legend of a masked man, who protects the dusty village of Shrirangpur. His strange disappearance for years makes the villagers wonder if this man ever really existed. But there is some mystery surrounding his existence that bridges the present world with the legend. This does sound extremely interesting; sadly all the excitement remains only on the paper (if any). It is formulaic and the shoddy writing makes it walk the path of regular potboilers. 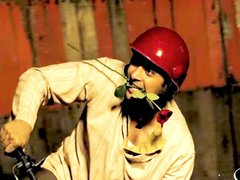 The writer-director wastes significant amount of runtime introducing characters in appealing ways, ultimately hampering the bigger picture. After an indie film, Mahajan seemingly couldn’t resist the urge of making a big-budget drama full of mindless lip-sync songs. Instead of advancing the story, the choreographed dance sequences relatively obstruct its natural progression. This leads to sluggish narrative and stretches the film to an extravagant almost 3-hours.

Pune 52 had its fair share of weaknesses, but Mahajan managed to impress with his original voice. He doesn’t appear to have learnt from his mistakes though. He takes his slip-ups to another level instead. Clichéd screenplay doesn't open up any room for improvement, let alone its strikingly predictable nature. One of the several takeaways from his previous film was long sequences in a single, continuous shot. Baji deeply misses the absence of such shots.

The director’s over-reliance on old-fashioned action scenes, over-the-top camerawork and dismal production values ruin his own execution in a big way. He overlooks novelty when it is neeed in some of the crucial moments. Also, the use of repetitive visuals to drive the point home was totally uncalled for. Abhijit Deshpande’s editing lets down time and again.

Baji is quite contrary to Pune 52’s minimalistic, natural-looking lighting approach, making it appear needlessly stylistic at various points. Post interval, almost the entire village appears to be wearing black clothes for some unexplained reasons. I doubt if that really adds any symbolic value to the story.

Shreyas Talpade plays Chidu’s goofy character with utmost honesty; however Jitendra Joshi’s outright baddy Martand stays with you. These two brilliant actors are pitted against each other, and they try their best to uplift a poorly-written film. The cameos of directors Ravi Jadhav and Nagraj Manjule were completely unconvincing. Run-of-the-mill fight sequences, loud sound and tacky visual effects fail miserably to generate the much-needed goriness. This results in an ordinary hero-villain film.

Baji is certainly not awful, but it is definitely not something you would want Mahajan to do after Pune 52.