An inspirational tale of innocence hindered by loose execution.

Children's minds are full of fantasies, wonders, adventures and probably what not. They fancy the world as a fairyland and build their own around it. Their wings don't need spaceships to traverse through galaxies. The universe becomes a never-ending canvas, where the colours of their dreams fearlessly portray their desires to achieve impossibilities. Even the tiniest thing turns into a matter of obsession for them. Indeed, it makes for a fascinating story. Avatarachi Goshta tries to capture that craze in an absolutely candid manner, sometimes even reviving your own childhood memories. Alas, the film fails to get a lot of mileage out of its compelling story.

The soul of this film lies in the Dashavtar tales from Indian mythology. Kaustubh - an innocent, little boy - finds a strong resonance with these stories. He tirelessly listens to Lord Vishnu's folkloric adventures. His granny once tells him that Vishnu will take a human avatar - the Kalki, to destroy the darkness of Kaliyuga (the present era). One thing leads to another and Kaustubh feels that he is none other than the Kalki avatar. what happens next is surely worth exploring. And this is despite prolonged dullness in the film's writing as well as execution.

Avatarachi Goshta is adorned with innocence and has plenty of funny elements up its sleeves. It doesn't turn out to be a laugh riot though. The subtleness in comic moments goes in the film's favour. Nevertheless, it also ends up disappointing you in the long run. Lengthy sequences between Kaustubh and Amod (Adinath Kothare) could've been far more bearable, had they not lacked humorous touch. Well, you don't essentially require comedy to stay hooked to a film. This one, however, badly needed some solid, crisp dialogues. 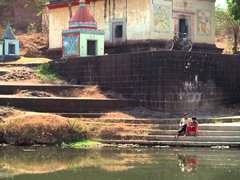 Writer-director Nitin Dixit tries really hard to make it engrossing, and some of the moments even set up for an inspirational ending. He smartly captures the insecurities faced by kids. Thankfully, he doesn't go detailing their problems. But his efforts fall short and create philosophical noise instead.

Dixit's directional style is good, but not exceptional. His minor mistakes (really minor to even notice) hamper the story's freshness, making the film a little sluggish and tedious. Mihiresh Joshi plays Kaustubh's part very well. Had he been guided diligently, he could've been more impactful. Yet, I am glad to see Kothare in such a natural role. Not that he is an excellent actor. Nonetheless, this atheist tenant looks significantly convincing than the chocolate-boy in his last film Premasathi Coming Suun.

After seeing the film's trailer, I was quite impressed with its camerawork. Yes; it tries to be stunning right from the beginning, and pretty much succeeds in its endeavours as well. Unfortunately, it lacks purpose. It is not that Avatarachi Goshta fails. In fact, it is one of refreshing stories of the year. But the problem is that you won't live with it in the time to come.