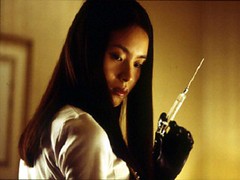 Audition is disturbing, gory and has a climax that haunts you long after the film’s conclusion. One of the best films in the Japanese horror genre, despite being devoid of ghosts.

It's with some skepticism I allowed my mother to sit through a film, which has the reputation of having one of the most famous torture scenes in cinematic history. (Some Priyadarshan films are also torture…more on that later.)

Mom reads English slowly and doesn't catch all subtitles, but it is clear that Audition has enough in it visually to leave her disturbed. When she woke up next morning, she complained, "What a terrible film you showed me last night. You should not watch these kinda films!" But then, she'd said the same thing while watching The Exorcist and I've stopped heeding her advice ever since then.

Good horror and gore is awesome. A genuinely scary film generates nervous smiles and laughter amongst its viewers. Despite not stating itself at the outset as a 'horror film', Takashi Miike's Audition, has plenty going for it to make you squirm. In 1999, when it was screened at various film festivals, Audition gained a reputation of being a film that witnessed walkouts by members of the audience. Whether this genuinely happened or it was a publicity-driven rumour, is unknown, but after having seen Audition on DVD, I'm not surprised they did.

The plot, despite being a feminist revenge fantasy, is wafer thin. Shigeharu Aoyama (Ryo Ishibashi), a widowed TV producer pretends to be Auditioning young women for a new show, when in fact he's really looking for a wife. He finds a demure, young candidate attractive, but as the film progresses, he comes face to face with her suspicious past. Director Takashi Miike uses a mixture of gore and realism to good effect, often teasing the viewer using Aoyama's dreams. Thankfully, he doesn’t portray it all as a casting couch and Aoyama’s character is not that of a producer lusting after a young woman, but instead, simply of that of a person genuinely wanting someone to spend his life with. Nevertheless, when he sits down to audition, Miike’s opinion of the current casting process in cinema becomes clear. “Man, I feel like a criminal,” says Aoyama.

Miike’s casting of Asami (Eihi Shiina), the prospective actress, is spot on. Her submissive self, clean as it may seem, makes her the last person you’d trust with having a suspect background. Her character – aptly described in her application form for the acting assignment – provides the right amount of intrigue for Aoyama to notice her, among the numerous other contenders who turn up for the audition.

The writing has several highpoints, especially during the climax, where it depends more on Asami’s lines for chills rather than simply gory visuals. It makes the climax full of several "facepalm" moments. All this, despite not resorting to 'creaky doors', 'monster under your bed' and 'curtains and the wind' horror. Miike proves that psychologically traumatised characters are far more effective at sending a chill down your spine, rather than loud, thumping background scores and mutilated corpses. Instead, the story breaks new ground by mounting its horror on the ‘what-ifs’ and ‘could have been’, rather than ‘what is’. What Miike leaves the viewer to guess, is whether things would have turned out the way they do, if Aoyama was really looking to cast an actress.

Audition has all the elements that have come to characterise Japanese horror cinema - long-haired actress dressed in a white gown with her head bent low, a troubled history of characters, jump cuts, and the absence of a background score that is intended solely to scare. All of them have been symbolic of Japanese horror through the noughties, a time when Hollywood has been facing a writers’ block in producing original and genuinely scary films.

Watch it once, when you’re alone.