You are promised an action film; you get an action film. The hint of a story is a bonus. The action is slick, even if a tad monotonous by the end.

I went to the cinema hall!! After two years and half a month! It was like going back to a home that was waiting for me. Enjoyed every second of being there. It helped that the film was one that I could approach with absolutely zero expectations, and I liked what was going on at the moment. Well, most moments.

In our imagination our future companions will have a dry sense of humour rather than a dad one. Great!

Anyone who has landed up in the theater to watch this one is there for the action. And they won’t be disappointed. At least quantity-wise. And in the beginning, quality-wise too. The action choreography is sharp and smart. Usually, the rhythmic beat to which it is edited makes me drowsy. But here, just when it begins to feel like more of the same, there is a camera movement or an action that shook me out of my lull.

Even in the non-action scenes, the editing and transitions between sequences keep you on your toes. This also means you are alert enough to realise that the country’s top military and political officials are watching the countdown of a ticking bomb in the situation room. But the makers have designed it to look like they are watching John Abraham’s antics like you are. Unfortunately, this break from the action to see a room full of decision-makers becomes disorienting.

This brings me to the romance and emotional angle the film has in the name of a story. The romance is as awkward as the action is smart. Calling it out as “cheesy” doesn’t make it any less so. The emotional angle, too, comes across as forced and dry. In fact, this part of the story seems functional rather than creative. The thriller bit with the bomb, on the other hand, is slightly better written.

Also, relatively better written are the lines said by the AI bot. It is good to know that in our imagination our future companions will have a dry sense of humour rather than a dad one. On the technological mumbo-jumbo front, the capabilities shown are scary because they are believable. Other tiny bits in the writing that caught my attention were inclusivity in terms of religious representation, a woman getting a prominent role without making a big deal about it. The snide remarks on current politics were thoroughly enjoyable too. It must have taken great strength of character to limit the climax to simple chants of “Bharat Maata Ki Jai” without going all berserk and dramatic. Also, I didn’t catch the origin of the terrorists. I don’t think it is mentioned at all. 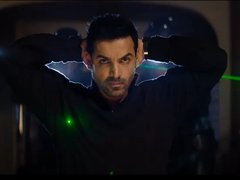 Unfortunately, there is problematic stuff, too, like stereotyping under the garb of entertainment and insight. And also, product placement and lapses in writing from lousy grammar to hyperbole like a new technology taking care of the entire global terrorist community(!!?)

I have always found it tough to comment on performances in an action-thriller. Not much is expected. Not much is necessary. John Abraham’s facial expressions didn’t feel wooden and thus were not distracting. I am not sure I can say the same about his fitness. Other than the action, the film is about him and his character. So yes, the film is an out-an-out John Abraham affair and is complete to the extent of having him ride a bike. The rest of the cast is actually all supporting roles ably executed.

The romance is as awkward as the action is smart.

Thumbs up, by Devasheesh Pandey, India TV : ...Elham's acting hits the right note and the dialogue part becomes better. Even though he is not physically as daunting as others, his presence is felt. An extended fight sequence inside the parliament stage is well shot and executed. It also brings the first person, video-game style to the film. This is the highlight of Attack.... full review

Thumbs up, by Rachana Dubey, Times of India : ...To sum up, Attack: Part One, is an engaging watch, from start to finish. It could have been even better if some of the characters surrounding John’s Arjun Shergill were given more thought and leg-room.... full review

So-So, by Russel D'Silva, Bollywood Life : ...Watch Attack for its attempt at something truly novel within the purview of Indian cinema; its slick VFX; its ability to seamlessly present the futuristic techno elements of its concept; the bike chase during the climax, followed by a clap-worthy stunt with an airplane; and finally, John Abraham doing what he's tailor-made to do. These portions combined are enough to tide over the bumpy bits of the movie.... full review

So-So, by Devesh Sharma, Filmfare : ...The film rests squarely on John Abraham’s shoulders and plays to his strengths. He totally looks like a pumped-up super soldier who is willing to do anything for the sake of his country. It’s a role tailor-made for him and he delivers on all fronts. He’s totally involved in the stylised action and deserves all the seetis. Now that his credentials have been developed in part 1, let’s hope the second part sees him in a bigger, more enhanced avatar.... full review

So-So, by Rohit Bhatnagar, Free Press Journal : ...Also, 'Attack - Part 1' might be a beginning of a new era in the Hindi film industry only if you ignore the long list of loopholes and cliché sequences. Since it all boils down to true love in our Hindi films, John saves the nation gracefully in the stylised climax, no matter what.... full review

So-So, by Punarvasu Pendse, fullhyd.com : ...Attack, all said and done, is going to be deeply polarising. For some it will be the movie that changed their idea of Hindi action films, and bridged the visual effects gap between Hollywood and Bollywood. For others, it will be unbearable with its cringy dialogue and unintentional humour. At the very least, however, it is a tightly-paced action film - paisa vasool.... full review

So-So, Glamsham.com : ...Overall, the film is well-written, but the story seems to be an amalgamation of many sci-fi English films. The main crux of the terrorist attack seems to be inspired by Hollywood – Gerard Butler’s ‘Fallen’ series, especially the 2013 film ‘Olympus Has Fallen’.... full review

So-So, by Shubhra Gupta, indian express : ...A crack contingent of the Indian army swoops upon a hideout across the border, and scoops up a most wanted terrorist. That adrenaline-filled sequence, which opens ‘Attack’, a film which hews close to its name, leads to a series of attacks on Indian soil. And then what happens? Counter-attacks, silly. If anyone dares attack us, we will give them ‘moonh-tod jawaab’, and stomp on their graves.... full review

So-So, by Sameer Ahire, Movie Talkies : ...Attack does not provide anything extraordinary, but it deserves to be watched for its brave attempt. John Abraham's fans can rejoice as their star has brought something unique this time, and they are gonna love his new avatar. Moreover, sci-fi action fans got everything they asked for, so overall it's an enjoyable affair for them. Let's see what this team has to offer in Attack: Part 2, and hopefully they will do better.... full review

So-So, by Saibal Chatterjee, NDTV : ...For lead actor, Attack is an opportunity to go all out with the action tropes. Prakash Raj, too, has all the ammunition needed to fire on all cylinders. But the actors playing the other key characters, including Rakul Preet Singh as the creator of the super soldier, are saddled with underwritten roles.... full review

So-So, by Namrata Thakker, Rediff : ...John says he will return with Attack Part 2, and here's hoping something bigger and better comes along. If you love action and John Abraham, give this film a watch.... full review

So-So, by Anuj Kumar, The Hindu : ...Overall, if the audience can suspend their disbelief after the pandemic for two hours, Action is a nationalist substitute for PubG, plus a heart that hasn’t stopped beating, yet.... full review

Thumbs down, by Rahul Desai, Film Companion : ...As Arjun rampages across the parliament with video-game-like precision, things like sarin bombs and missiles sneak into an already-ridiculous plot. The action is extensive but also too extensive, almost boring in its penchant to reduce every location to an explosive MMA ring.... full review

Thumbs down, by Shubham Kulkarni, koimoi : ...I share my birthday with John Abraham and it only makes me sad to see him make such choices. Go for it if melodrama dressed as Sci-fi patriotism is your thing.... full review

Dear Meetu is back to the theaters - this means good news for us. We would hopefully get more reviews. It seems John Abraham wrote the story himself. Only thing is that I like his actions, but he is getting too typecasted in similar genre of action movies. Thanks for the honest review.

Raj has given this movie a Want to Watch(John is getting type-casted with action movies). Raj has posted 99 comments and has rated 67 movies. See Raj's page for more details.
meeta