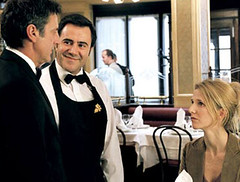 Apres Vous, has that amiable, pleasant feel for a film about a klutzy Maitre’D who finds himself in a crazy situation as he tries to help a suicidal stranger. Everything feels personalized, the situations are familiar and the background music is that cheerful violin waltz where you feel it’s all going to be okay by the end of the film. Of course, a film set in Paris automatically makes you feel better about life.

It’s what we’re best at, as an audience – giving out two cents worth on how to handle a situation in a film, and laughing with/at the person involved in the pickle. It’s the kind of film that makes you curse the protagonist and feel extreme reactions that stays with you for longer.

Apres Vous or After You, Pierre Salvadori’s latest film, does that to you – as you witness Antoine (Daniel Auteui) going out of his way to help Louis (Jose Garcia) from committing suicide.

A limp, emotionally disturbed Loius stands on a suitcase in a park, with a rope around his neck, about to end his life. Antoine takes a shortcut through the same park, only to find him and save him. He soon becomes his caretaker, slowly trying to solve everything that is wrong in Louis’s life.

Daniel Auteui is absolutely charming, as a funny savior for Louis, while he drives Louis around and saves him from all sorts of trouble.

So why would he go through all this trouble? His girlfriend Christine (Marilyne Canto) asks him the same thing, and on not getting an answer, they things go awfully wrong. It’s this underway irony in the film that makes for a hilarious 2 hours. You keep trying to figure out why Antoine would wreck his personal life to mend someone else’s.

And suddenly, everything that has been established in the film so far – relationships, his motivation/nature to help a broken soul goes for a toss. It’s almost lunatic, this film, where every situation Antoine finds himself in, beats the previous one.

The best part of Apres Vous, is that it doesn’t offer you any answers. There’s a scene in the film when Antoine brings Louis home for the first time. He lies to his girlfriend about Louis. The look on Antoine’s face when he reveals to Christine that he doesn’t even know the guy’s name aptly describes the film: Crazy, illogical and just charmingly funny!

The DVD has no extra features, apart from other Paramount Classics film trailers. The subtitles are up to mark, at no point do you feel you’re missing the point of the dialogue.

Apres Vous has a clumsy, endearing feel to it. You want to put yourself in Antoine’s shoes and knock some sense into him. You want to be a shrewder person, who thinks about the self first. Writers Daniele Dubroux, Benoit Graffin, David Leotard and Pierre Salvadori could have made the script a bit tighter, and maybe developed a stronger relationship between Antoine and Louis.

Otherwise, Apres Vous is a breezy, light film that just makes you want to relive all the comic misunderstandings. It’s not the best film you’ll see but your heart will go out to it nonetheless.

This was the "inspiration" for Nautanki Saalaa.