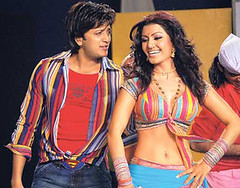 Attention to story, acting, dialogue - all serve no purpose in the world of slapstick comedy.

The beauty is the director has a minimal role to play. It only takes a one-word instruction to the loud actors - "louder!!". And then have the louder compete for the loudest. Hire an amateur cameraman who wants to try out all the lenses and angles in the book. Since all the other work is taken care of so efficiently, the director can write the dialogues himself. After all, for every 100 inane lines written there is sure to be a-line-and-a-half that will make the average person laugh. That is much more than what a comedy of this caliber aims at! By the way, there is only a slight connection between the title of the movie and what most of the characters feel about money.

Koena Mitra, Celina Jaitley and Riya Sen are like toy rattles; they amuse the target audience, but the noise they create is intolerable for the rest. The show of skin is unbeatably gratuitous. What a wonderful waste of talents like Riteish Deshmukh, Shreyas Talpade, and Anupam Kher! Though Riteish’s comic timing is great, his whole act looks like a repeat performance of the dozen odd comic roles he has done. His make-up as a girl is done really well. Shreyas Talpade has done the best he could with a character that had very few lines. Anupam Kher unnecessarily does yet another unnecessarily tasteless character. Suniel Shetty does justice to his role and has especially superb timing in a couple scenes. Too little, too late.

All these half-decent performances put together cannot save the movie from the random story and shoddy screenplay. Sexual innuendos galore can amuse only teenagers. There is the typical slapstick fare - loads of make-up and wigs, people slapping each other in circles, the few funny lines losing their charm by repetitiveness, people playing catch with diamonds that fly in air. Add to this a dash of melodrama - "“xxxxx needs yyy lakhs of Rupees for an operation, or they are going to die in z hours". The perfect recipe for a nagging headache.

The picturisation of all songs (except the title song) would have done better in an album made for M TV. Feet tap with the music of the title song and ‘Dil mein bajaa guitar’ and they are half-hummable.

What nags me is – was it worth my reader’s time to even read this review?

So-So, by Nikhil Kumar, Apun Ka Choice : ...The comedy in the movie is juvenile and at times even childish... full review

So-So, by Taran Adarsh, IndiaFM : ...is not for those looking for path-breaking cinema…not for the pseudo critics...It’s for the aam junta... full review

So-So, by Nikhat Kazmi, Times of India : ...We won't label it a laugh riot, yet we'll confess it makes you giggle... full review

Thumbs down, by Prema K., Bollyvista.com : ...Pritam's music sounds crazy to the ear but doesn't have the same effect on screen.... full review

Thumbs down, by Subhash K. Jha, Glamsham.com : ...What the plot lacks in innovativeness is made up for by a certain breathless momentum and crass candour... full review

Thumbs down, by Deepa Galhot, Sify Movies : ...Films like this depend on how fast and furious the gags can go, and how many crazy characters can be fitted in-- the plot is of no consequence.... full review