The most exciting ensemble cast of the year delivers exactly what it promises in David O. Russell's hilariously manic tale of ambition and deceit in the America of yore, based on a true life scam.

There are at least two terrific things one takes away from David O. Russell's latest. The first is that his terrific ensemble cast, good enough to make you want to watch a film that even starred any one of them, delivers knockout performances without exception.

The second, more importantly, is that Russell is slowly beginning to develop a strong, envious filmography; combine this film with his last two - Silver Linings Playbook and The Fighter (not to mention one of his much older films, 1999's Three Kings, which makes for a decent, engaging watch) - and he has emerged as a director to always watch out for, here on.

He uses his own penchant for crackpot characters that he displayed in Silver Linings Playbook, and adds a dash of Scorsese to it; complete with those familiar voiceovers - except, Russell goes full throttle on the mental with it. 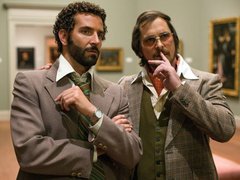 If you've watched Scorsese's latest cult classic, this year's The Wolf of Wall Street, you'll be excused for feeling just a wee bit of dejá vu, before Russell's twisted, neurotic characters make you get over it quite soon. If Wolf was about material excess and debauchery, Hustle is all inside the heads of the characters.

Based on a true life story of a scam in the 70s, American Hustle revolves around an art scamster played by Christian Bale and his partner Sydney (Amy Adams), who are coerced into participating in a plan hatched by an FBI agent - Bradley Cooper - to bait dishonest Congressmen. Well, that's that. This is the kind of film where the plot matters much lesser than the situations and interactions between the characters. Often unrelated to the larger story, the characters keep getting into actual and metaphorical tangles, as they cope with the cards life deals them.

Every crazy character has their own set of crazy desires, and the drama nearly always plays out at high octane hilarity no matter how serious the actual scene at hand is supposed to be in the lives of those in it. This is the crazy America of the '70s, and Russell gives us a quintessentially American film; the land of ultimate, unbridled ambition, and the wherewithall to chase it at all costs.

With Bale, Adams, Cooper and the ultra-talented Jennifer Lawrence as Bale's psychotic, passive-aggressive wife, Russell combines the cast of his last two films, and ups the ante with their performances.

Bale, in particular, is a marvel. For the casual cinegoer, Christian Bale will probably always be Batman. But if you've watched more of his other work, then it becomes clear that despite doing three Batman films, the character of Batman for him is but an aberration. He is a chameleon, willing to undergo whatever physical transformation it takes to become the character. His pot-belly and waning hair here add such tremendous texture to his overall presence.

American Hustle is a long film. At well over two hours, the film meanders and takes its time to go where it wants to. Often, the detours in the screenplay seem like indulgences, even if the scenes stand out themselves. There are too many confrontations, and the film could have done with a better dramatic graph. The sub-plot regarding Christian Bale's and his wife's character - and the effect that his relationship with Adams has on it - seem like it was devoted too much attention.

Then again, that could just be me. The film largely keeps you interested; and as I mentioned earlier, the interest extends to when and what David O. Russell has in store for us next.

It is time to check out some meaningful stuff, just love to see these western stars using their popularity to affect lives by choosing meaningful scripts for adaptation into the big screen not like the desi pseudostars who form fan groups like tingupuri, paglapuri, masalapuri, forgepuri, courtpuri, floppuri etc.

12 Years a Slave strikes me as its lead actor
(Chiwetel Ejiofor) an Oscar 2014 nominee for best actor has his roots from my nation.