The Amazing Spiderman 2 isn't half-bad, to be honest; but there are times when one feels that it doesn't do justice to the hope given by the first film. Still, there's some fun to be had if you don't mind a lot of romance and backstory along the way.

Wait, another Spiderman film is back already? Well, yes it is. The sequel to the reboot of the adaptation is in theatres, and it is as winded as this sentence. When the fortuitously named Marc Webb helmed the first film of this series, one felt that Spidey was in safe hands. With this film, you won't change your mind just yet, but no one will judge you if you pause for a quick rethink.

Heavy on romance, pauses and nothingness, but also sprinkled with some amount of action (not to mention tongue-in-cheek humour), The Amazing Spiderman 2 continues in the same vein as its predecessor, which essentially means that it will entertain a few, bore some others, and leave the rest waiting for the next big Marvel film (X-Men: Days of Future Past, which is just around the corner!)

Interestingly enough, that firecracker of a lady, Emma Stone, is the best thing about this enterprise, as she lights up the screen with her Gwen Stacy everytime she shows up. She more than makes up for a rather rough-around-the-edges Andrew Garfield, who seems in his element only in the Spandex Spidey suit, where you can't see him emote anyway. In fact, considering how much time Marc Webb spends on the Gwen-Peter romance in this film, you almost wonder if he was making a film called, say, 500 Days of Gwen. 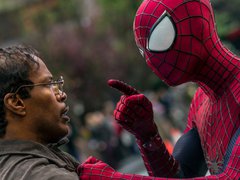 That isn't to say that the romance isn't sweet; it quite is. Still, you spend way too much time waiting for Electro (and the Green Goblin; and Rhino) to show up, and when they do, you're served with action that isn't quite as imaginative as you'd have hoped. True, Spiderman has clearly gotten the hang of webslinging now that he's into his second film, but you can't just resort to showing cars stopping mid-air just above an innocent victim's head all the time.

Electro's backstory is treated with kindergarten naiveté, and is another subplot that is devoted longer screen time than it deserved. When he does eventually show up, he does the bright and shiny things you expect him to do, set to an unusually screeching background score. The action set-pieces between him and Spiderman are more fun for the chemistry between the characters, than for any actual brilliance in execution.

What you're left with are a few periodic smart-ass one liners from Spiderman, and a gut-wrenching climax; albeit one which fans of the Spiderman comics would have been expecting anyway. Expectedly, tantalising hints about the villains in future films are present in this one.

What it boils down to, then, is this: Like the first film, this one too has Spiderman play out a scene with a little boy. The point of these scenes, I suppose, is to bring out the hope that Spiderman instills into the hearts of those who believe. It is that hope that will have people waiting for the next film with equal eagerness. There isn't much of that hope that this current film can stake claim over, though.

The amazing Spider-Man 2 - truly an amazing 3d spectacular. Story wise somehow I felt part 1 was much better. Emma stone and Andrew Garfield are great...they continue their magic here. I wish the story was not as predictable as this was. But no regrets watching this one as it's still a visual treat for spidey fans like me.

I think the movie was OK. But it could've been sooo much better. The quirkiness of the protagonist as played by Andrew Garfield in this series is good at times and irritating at some other times.

I just loved the chemistry between the lead pair, even though the supposed heartbreak lacked intensity. After watching this movie, I now have a huge crush on Emma Stone :-D

She has indeed played the part very well. The other win in the casting/performance department is Sally Field. I loved her as Aunt May.

The best part of the films for me were the bullet time sequences and the action sequences in the beginning. But the villains were very disappointing. Electro should've been the only villain with maybe a hint of Green Goblin entering at the end. The role of Electro should've been written better, especially the transition from Max Dillon to Electro and his powers/weaknesses exactly. Like it is never clear how he can absorb the electricity from an entire city but can still be "over-charged" like a battery somehow...

I did enjoy the 3D and the sequences when Spiderman swings through the city. All in all, it was OK, but not great. Could've been so much better, with a little intensity and depth in the performance. For a moment I felt that if Marvel Studios-Disney had the rights to Spiderman then they would've done so so much better. But alas, that's only wishful thinking for now.

I hate it when love story takes centre stage of super hero movies.

I hated all the previous spiderman movies, largely because of the movie trying to highlight the "human" side of things!! It's a comic for god's sake, no one expects to see soft,mushy,touchy,feely stuff!!

Although The Amazing spiderman movie was a good start, this one is boring!

Btw, author needs to know about his spidey comics and difference between, spiderman, amazing spiderman and ultimate spiderman.

Aseem has given this movie a So-So. Aseem has posted 1 comments and has rated 1 movies. See Aseem's page for more details.