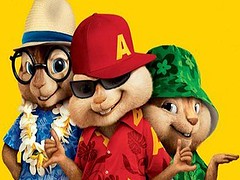 In a way, Alvin and The Chipmunks: Chip wrecked is like our very own Golmaal series. They come around every Diwali, banking on their previous year’s success, and each year the movies get worse. Chipwrecked is no different, if anything it’s more annoying, unbearable and I would say meant for kids, but even your kids can do better.

Squeak. Squeaaaaak. I could save you the trouble of watching this movie (and forgive me for summing up a review in one sentence – but PLEASE don’t) by letting you know that Alvin and The Chipmunks: Chip wrecked is only about the squeaking.

The third part to a decent first movie (Alvin and the Chipmunks), Chipwrecked takes on pop culture references of Cast Away and Lost, while it shows Alvin, his chipmunks and their female doppelgangers getting stranded on the island of Dr. Cliche, after creating havoc on a luxury cruise. The chipmunks are, at best, ignorable. They could be cute if they would just tone down the squeaks, but then why would they?

Chipwrecked then moves through a slapstick adventure, churning out chipmunk-ish versions of hit songs (Destiny’s Child, Katy Perry, Lady Gaga). It’s one song after another and one slapstick joke after another. With no binding ingredient. It’s almost like buffering YouTube videos in a row. Seriously, there’s nothing more to the story – I almost wish I had more to write.

What you get however, is a series of annoying, helium-voiced sequences by writers Jonathan Aibel and Glenn Berger (Of Kung Fu Panda fame). Essentially, Chipwrecked is a lazy and dumb attempt to repeat its winning performance at the box-office. While, in the 1950, the Chipmunks were more known for as cartoon-based band that only released helium versions of popular songs.

I’d want to write about how children should be given better options for a festive season movie, but as much as I hate to admit, this is the perfect movie for children to watch. With a large tub of popcorn, they can continue to revel in loud, bratty behavior (so let’s just say if your child isn’t bratty, don’t take him/her for this). If you’re an adult however, and you’re in a movie theatre having to bear through this film, you can be grateful that it’s only 87 minutes long.

Alvin and The Chipmunks: Chip wrecked is formulaic, predictable, crass and extremely obvious with its in-film branding (Carnival Cruise Line). It’s like the producers of the film sat down one evening and decided on how to channel the money that was coming in – and put crucial cinematic elements like plot and character-relationships. Take your kids for a picnic instead, or for a weekend getaway. Or just sit at home and watch How the Grinch Stole Christmas!, and you’d be better off.