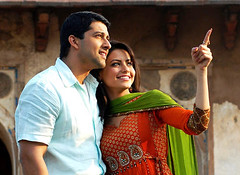 A start towards being a Hrishkesh Mukherjee film. Keeps that smile on the face throughout. But doesn't offer a laughter fest.

NOT A REVIEW - Just waiting for laughs...

Aloo chaat, the name by itself tells you that there is some level of symbolism going on here. Either the characters will represent different ingredients of the delicacy or they have a life that is as tangy-spicy.

The promo that runs about 2 minutes made me laugh a couple of times so looks like we are in for a good time. Unless one of my worst fears about funny promos comes true - that they have exhausted their gags in those 2 minutes. Let's hope not.

I can assure that no one from the audience will have a single moment of embarrassment or discomfort when the film is on; it is so clean

Though making us laugh is not the only intention of the film as per Director, Robby Grewal -

Aloo Chaat was conceived as a film with the objective of entertaining the audience, with a liberal dose of fun and laughter, but at the same time leaving a pertinent question regarding discrimination of people on the basis of caste and creed.

Ouch. Does that mean we should be prepared for a sermon on religious equality?

It’s a film set in Delhi with all the trappings of a middle class Punjabi household. I seriously believe Punjabis are the funniest species on the planet, and I have attempted to capture that very essence of Punjabi humour in my film.

Hmmm...looks like the caricatures in the promos are there to stay.

The déjà vu feeling makes you uneasy as you see the "Amerika-returned" boy look for a suitable match in India. The set-up that you must have seen umpteen number of times in various movies touching upon the issue. And unexpectedly, the clichéd setting of an arranged marriage meeting changes into a quirky comic situation. The smile that starts at that point stays on until after you've left the theater. Sure there aren't any laugh-your-guts-out moments but there are many sweet comic moments and a few idiosyncratic elements that render a light and yet complex texture to the story.

Very cleverly Aloo Chat salutes the alternative to eloping - a trend set by Dilwale Dulhaniya Le Jayenge. Intermittently, it also reminds you of the number of Hrishikesh Mukherjee/Basu Chatterjee films set in middle class families. Though it is a good start towards being one of them, it doesn't come close to becoming one. The Mukherjee and Chatterjee films had a knack of making the most improbable situations seem real. Here a possibly real situation seems contrived. And yet you are reminded of films like Chupke Chupke, Bawarchee and Hamari Bahu Alka.

The story is sprinkled with interesting characters. From Nikhil's (Aftab Shivdasani's) resentful dad to his suspicious maternal uncle, Chaddami to his tolerant grandmother to the street-side chaat vendor - each one was given lines that added to their personality. There is something very refreshing about Chaddami who is supposedly a fool everyone loves to put down but is actually the most observant of them all. The cast is not outstanding because it is still caricature-like and the film does tend to slip into slapstick mode every once in a while. But, they all do a good job of making us smile with their timing and the specific style of dialogue delivery assigned to each one of them.

There is also this underlying element of putting things in perspective or emphasizing the fact that 'everything is relative'. This is done through the story and not explicitly verbalized. Sure, the film goes into preachy mode only for about two sentences towards the end. But that's hardly anything to complain about. It is ultimately a clean comedy that doesn't even pretend to make you laugh out loud. Neither does it try to be a technically brilliant product. They just want you to grin and smirk and think about a socially relevant issue. And achieve that, they do.

Thumbs up, bigoye.com : ...Aloo Chaat is an honest attempt and surely worth a bite.... full review

Thumbs up, by Gaurav Malani, indiatimes : ... The narrative is kept crisp and concise, and focuses mainly on female bonding within the family. The comedy isn’t slapstick.... full review

Thumbs up, Movie Talkies : ...The film is just like its title, delightful, with just the right amount of mirch and masala.... full review

Thumbs up, by Nikhat Kazmi, Times of India : ...a charming comedy of manners with a potent message: India is and can exist, only if there is unity in diversity.... full review

So-So, by Noyon Jyoti Parasara, AOL INDIA : ...The first half an hour is lost in getting to the ‘big plan’. The screenplay could have been worked on.... full review

So-So, by Elvis D'Silva, Rediff : ...This movie is not as tedious as some other 'comedies' that have robbed us of valuable hours of our lives in the recent past... full review

So-So, by Sonia Chopra, Sify Movies : ...Aloo Chaat’s content is not as palatable as the film’s mouth-watering name... full review

Thumbs down, by Anand Vaishnav, Buzz18 : ...It's boring screenplay and slow pace fails to create an impact of a good comedy.... full review

Thumbs down, fullhyd.com : ...This one is tolerable if you are watching it one or fewer times, especially if you are slightly drunk.... full review

Thumbs down, by Martin D'Souza, Glamsham.com : ...he story is weak, the acting below average and the cast just not upto the mark.... full review

Thumbs down, by Ashok Nayak, Now Running.com : ...predictable and something that has been seen a million times before... full review

Thumbs down, by Taran Adarsh, SantaBanta.com : ...20 minutes into the film and you know what the culmination would be.... full review

Thumbs down, by Harshita Kohli, StarBoxOffice : ...As a part of the audience, I yawned through most of the film... full review

Nikhil's (Aftab Shivdasani) family is looking for a bride for him. Only hitch is that he is in love with a Muslim (Aamna Shariff). Nikhil is sure that his family will not accept her. He and his uncle hatch a plan to change the family's outlook.

Aloo Chaat is a simple comedy movie..with a twist..it beautifully shows the limits of a middle class family.