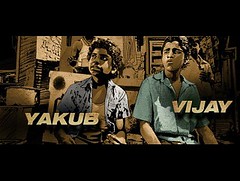 Dark, violent, underworld crime drama. There's more of the same. With a slight difference that's not completely new, but some thought nevertheless. That's not enough though. You are left a spectator and are not riding along with anyone in particular.

Allah ke Bandey is about two juvenile delinquents. So it is about how they are treated in jail for juveniles and what becomes of them when they come back to real world. But this awesome trailer shows there's more meat. It is also about relationships and perceptions. I am absolutely kicked about seeing this film.

The poster has a very gritty, city crime feel, but one of the first things you read about the film is, “it’s not a film about crime, it’s about the society we live in”. This sounds fluffy, something some marketing person made up for the sake of being different. I was just about to dismiss the film as yet another film about Mumbai's underbelly and the crime that goes with it, I came across this very interesting interview with Faruk Kabir. It talks about the music, the shot taking in great depth. Also, another interview shows Faruk's inisight.

In a larger picture, the film is a tribute to all the children of the world who are exposed to crime as the society they live in isn't giving them better opportunities.

I've been waiting for a good lead role for Sharman Joshi. Here, he might not be doing a solo but it will be a treat to watch him in a serious role. The other lead is played by director, Faruk Kabir. He has great intentions -

"Allah Ke Banday will open a Pandora’s box and will raise a lot of uneasy questions to which, we as citizens of a democracy, have a right to demand answers to,” he points out. “I want to make things uncomfortable for those in power.”

Meanwhile it seems to have succeeded in getting the censor board uncomfortable, not that it takes much. Seriously, I think I'll soon have to start a section which lists the censor board objections for each film. Just look at how ridiculous this is getting. They want the term “Gandhigiri” removed because the sentence refers going to jail!

It's not fair to the audience. They don't get to see what the director/writer had in mind. Someone who is not at all related to the film decides what stays in. Grrrr. Anyway, I'm still looking forward to the film this coming Friday.

Music Reviews milliblog - " Too many cooks, as usual, you know what…!"

Pkanet Radiocity - "Ishq Bector signs and raps in his inimitable style and the song is a welcome relief from the dark and heavy mood of the album."

The "revenge is futile" concept is as new as the next "boy meets girl" plot. Moreso, when it's set in a Mumbai slum. But that in combination with the "ganglord wants to mend his ways" has enough meat to make a film if it is treated with finesse. Allah Ke Bande starts on its way there, but gets lost in trying to stylize and dramatize. A couple of very interesting plot points lose out because the writer/director don't know where to focus.

The writing also suffers from the usual pace issues. One half slow, other half desperately trying to catch up. I understand the set-up is necessary for us to feel for the characters, but here it didn’t matter. The second half could very well have been a different film. None of the characters introduced in the first half have anything to do post-interval (yeah-yeah, except the protagonists!)

Sharman Joshi is the cool, calculative planner, Vijay and Faruk Kabir is the impulsive executor, Yakub. Though there were times when Yakub doesn't follow plans and Vijay does most of the execution. But there's no serious, unfathomable deviation from initial set-up. Sharman does a very good mix of tense, disappointed, rebellious, romantic. Faruk on the other hand is very repulsive. This is intentional in all likelihood, but it gets overbearing and boring to see him on screen. Oh yeah, and the boys who play young Vijay and Yakub didn't work for me one bit. Their fuming seems superficial and their wigs serve as an unpleasant distraction.

There are soft moments and a couple of thought-provoking dilemmas. Mostly evoked by Atul Kulkarni's character, masterji (the school teacher). That's the situation, not the performance. This role is nothing close to what our man is capable of. The other moments are allowed by Anjana Sukhani's character, Sandhya. Sure, this is just another case of the woman being used as a prop, but Sandhya had shades of Parveen Babi's Anita in Deewar.

There are many more smaller characters, but none that stick with you except for Naseeruddin Shah's performance as a warden. He has an impact on your nerves when he's on screen but after having seen the whole film, that role just looks like it was there for that one brutal scene in the jail.

Allah Ke Bande's attempt at showing the inhuman conditions prevalent in such "homes". It tries to show how much harm these homes do instead of teaching the children a better way of living. It doesn't want to take a risk and keeps itself from getting too dark.

A movie about crime usually has very little new to say. Allah Ke Bande tries real hard. You can't say it succeeded, if after seeing all the difficulties the protagonists go through, you feel, they get it all too easy. Are too many movies on the subject desensitizing us?

Thumbs up, bigoye.com : ...Farukh Kabir has hit the bull’s eye with his directorial debut.... full review

Thumbs up, by Deepa Karmalkar, Bollywood Chaska : ...Apart from his stellar act, Faruk must also be lauded for his scintillating direction, screenplay and dialogue. ... full review

Thumbs up, by Taran Adarsh, Bollywood Hungama : ...On the flipside, the writing isn't convincing at times... full review

Thumbs up, by Sukanya Venkatraghvan, Filmfare : ...Director Faruk Kabir has a firm grip on the story that slips a bit in the second half but picks it self up before you can complain... full review

Thumbs up, by IANS, MSN Entertainment : ...The gripping narrative takes us through the world of petty crime and underage lawlessness non-judgementally... full review

Thumbs up, by Anupama Chopra, NDTV : ...Kabir's cameraman Vishal Sinha goes through the rugged merciless slums searching for only Allah-knows what. ... full review

Thumbs up, by Nikhat Kazmi, Times of India : ...The high point of the film are its strong performances and its authentic backdrop... full review

So-So, by Nikhil Kumar, Apun Ka Choice : ...Allah Ke Banday is a promising debut by Faruk Kabir but is not void of amateurish rawness in direction and acting. ... full review

So-So, by Blessy Chettiar, DNA : ...could have done with a tighter script... full review

So-So, by Deepa Gahlot, Film Impressions : ...The first half of the film has some wrenching moments, in the way kids are treated in juvenile homes (Naseeruddin Shah makes an appearance as a nasty warden, and later, Atul Kulkarni as a reformer), but after that there is not much to grip the audience.... full review

So-So, Movie Talkies : ...The film definitely makes an impact which is further enhanced by its authentic locations and lingo.... full review

Thumbs down, by Bobby Sing, Bobby Talks Cinema.com : ...a mixture of all the above mentioned movies with only one worth remembering scene and several forgettable ones.... full review

Thumbs down, by Mayank Shekhar, Hindustan Times : ...There is something annoyingly simplistic about gruffly, gutter groups... full review

Thumbs down, by Rajeev Masand, IBN Live : ...Expectedly, you can count on Naseeruddin Shah to show us how it's done.... full review

Thumbs down, by Shubhra Gupta, indian express : ...Some of ‘Allah Ke Banday’ reminds you of ‘Sleepers’; some of it is ‘City Of God’; it also references several recent similarly themed Hindi films touching upon the slumkids-crime-life axis.... full review

Thumbs down, by Komal Nahta, koimoi : ...Sharman Joshi does a fine job, as always.... full review

Thumbs down, by Noyon Jyoti Parasara, Now Running.com : ...Allah Ke Banday is not a noir and neither is it a true drama - because the drama never builds. ... full review

Thumbs down, by Raja Sen, Rediff : ...The film tries to be 'dark and hard-hitting,' as the blurb on the back of the DVD cover will surely say, but is compromised by poor acting from the support cast and, well, ludicrous writing. ... full review

Thumbs down, by filmbear, Upper Stall : ...There is hardly a reflective moment in the film.... full review

PallabB: Allah Ke Bandey is a must see film.... We must encourage good cinemas....

bollywoodx: Review: ALLAH KE BANDEY is easily one of the best film of the year. But screenplay should have been tighter. Go for it 3/5

Abu125: Allah Ke Bandey is a good honest effort that is well-shot and definitely could have been better but definitely a decent watch !!!

yashrocks09: Allah Ke Banday lacked the punch required, it was like it hits you with a scene and then goes down and so on..

Sethumadhavan: Allah Ke Banday- an interesting premise and a good 1st half, but then its a downhill journey till the end.

Yay! Thumbs Up, by minesh1963 : Bravo Faruk and beware Farhan Akhtar, for Faruk is not only a talented filmmaker

Yay! Thumbs Up, by Vikrant : Allah ke Banday is unbelievably similar to City of God http://www.imdb.com/title/tt1292642/

Two boys from the slums are budding criminals and end up in a remand home for delinquents. They come out stronger and meaner men.

I'm looking forward to this 1