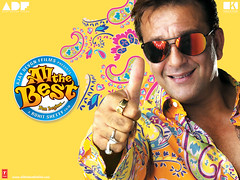 Same ol' senseless slapping about, fooling around and basically random running all over the place. The regular elements of a typical slapstick coexist and as always, don't entertain.

Sometime earlier this week, a friend suggested that all I'd need to do for the review of All the Best is to copy-paste the review of Golmaal Returns. I laughed it off then. On Diwali-eve, I'm so tempted to use that suggestion as really well-meaning and useful advice. But, non-plagiarizers that we are, here you go. (And if don't care for the details, the rating says it all. Golmaal Returns is not recommended and neither is All The Best.)

There are these two buffoons who are the creative types, so they obviously can't earn for themselves - Prem, Prem Chopra (Ajay Devgan) and Veer (Fardeen Khan). But they have expensive tastes and style of living. So, of course they beg, borrow, AND steal. And lie, lie to cover that lie and so on. And of course, a successful business tycoon, more gullible than the average nincompoop, Dharam (Sanjay Dutt) completes the circle.

Yeah, that's the kind of "plot" we are looking at. (Of course, you can choose not to look at it, I didn't.) Add to it the endless stream of caricatured characters who add to the commotion. But, there is this razor-thin silver lining to this dark cloud - there are a few good one liners every once in a while. And they are delivered pretty subtly, especially in comparison to the rest of the movie. The understated tone in which the lines just come make them funnier too. But they are only few and not worth spending those extra calories you've put on this festive season. Enjoy the extra weight, seriously.

Nothing else is subtle about the rest of the show though. The acting is loud and the background music is louder. And when that's deemed "not enough" there is this shriek-track played in addition to the background score. Supposedly to make us laugh or NOT!

There isn't anything stylish or cool or worth-watching about the actors' appearances either. The women are wearing the lousiest of outfits and are made up way too much. The men are in their usual slapsticky mode, cracking a few toilet jokes, a few innuendoes and the occasional witty line. So mundane is that there is no amount of oomph their presence could add. Not that they are the best lookers in the industry anyway.

A lot of older films are referred to. Maybe they are supposed to be tributes. But looked more like insults both in the way they were used AND because the film that's paying a tribute also needs to be of a certain basic quality to consider itself worthy of paying that tribute, right?

There is this slight comment on undying friendship and the extent to which the best of friends can go to save each others' skin. And there are a couple very sweet moments between Ajay Devgan and his screen partner Bipasha Basu. The fact that they worked for me despite coming towards the end of a tiring film, means all the contributors to those shots did their job really well. If only there were more of those.

Yes, guys, go watch that diya burn. Your Diwali will be happier by avoiding this one.

Thumbs up, by Sarita Tanwar, aslibaat.com : ...Fardeen Khan has equal footage and he proves he’s super when it comes to comedy... full review

Thumbs up, by Bobby Singh, Bobby Talks Cinema.com : ...With the entertaining comic timing between Sanjay Dutt & Ajay Devgan, the film picks up fast and gets good support from the side tracks of Johny Lever & Sanjay Mishra. ... full review

Thumbs up, by Taran Adarsh, Bollywood Hungama : ...Ten minutes into the film and you know that ALL THE BEST is all about mistaken identities.... full review

Thumbs up, by Anand Vaishnav, Buzz18 : ...Sanjay Dutt is the soul of the film. Despite being an Ajay Devgn production, Dutt gets the best lines and is presented in a way that does justice to his seniority.... full review

Thumbs up, by Aniruddha Guha, DNA : ...Even though the drama becomes predictable after a point, the gags keep you engaged. ... full review

Thumbs up, by Martin D'Souza, Glamsham.com : ... MUST WATCH... full review

Thumbs up, by Rajeev Masand, IBN Live : ...Shorter in length – its songs sacrificed, its action scenes trimmed – All The Best might have been a great Diwali treat. As it currently stands, it's a delicious one-time watch.... full review

Thumbs up, by Shubhra Gupta, indian express : ...Actually, it doesn’t really matter about who loves whom, because ‘All The Best’ cheerfully sacrifices all pretence of sense to ensure the gags are rapid fire. ... full review

Thumbs up, by Gaurav Malani, indiatimes : ...Nevertheless the humour works since the treatment is not fully farcical but also has a plot primarily focused on mistaken identities... full review

Thumbs up, by Sarita Tanwar, MiD DAY : ...Since it's based on a play, it takes a while for Rohit to trigger the fun.... full review

Thumbs up, Movie Talkies : ...The music of the film is good, the songs in 'All The Best….Fun Begins' are quite situational and are merged perfectly to suit the mood of the film... full review

Thumbs up, by Anupama Chopra, NDTV : ...It’s seriously low IQ but you can’t stop laughing. The actors are having such a good time that their energy is infectious.... full review

Thumbs up, real bollywoood : ...Dutt too is in top form and entertains.... full review

Thumbs up, by Sonia Chopra, Sify Movies : ...Screenplay writer Yunus Sejawal (Life Partner, Do Knot Disturb) and Robin Bhatt (U, Me Aur Hum) give us a riveting script.... full review

Thumbs up, by Pankaj Shukla, SmasHits.com : ...Rohit Shetty has found a good High Five in his actors.... full review

Thumbs up, by Sameer Dagga, StarBoxOffice : ...On the narrative front, the pace of the film is loose in the first half with a few incoherent sequences put together which sometimes seem out of the place.... full review

Thumbs up, by K K Rai, STARDUST : ...The music by Pritam lacks quality to attract the audiences to theatres on its own.... full review

Thumbs up, by SpiceZee Bureau, Zee News : ...being low on IQ is actually funny... full review

So-So, by Subhash K Jha, AOL INDIA : ...Shetty doesn't use the touristic spot as a character. You suspect he places his colony of characters in the Goan l... full review

So-So, by Aparajita Ghosh, Apun Ka Choice : ...Ajay Devgn (with an ‘a’ flicked out of his surname) does some dangerous stunts besides showing his comic flair... full review

So-So, by Kara Baer, Bolly Spice : ...The plot is an exercise in that old chestnut of mixed-up identity... full review

So-So, by Samrat Sharma, fullhyd.com : ...There's something to be said about his homegrown aesthetic, though - every shot is hand-made, every sequence crafted with the raw assurance of a team delivering their all on the sets.... full review

So-So, by Mayank Shekhar, Hindustan Times : ...It’s heartening to watch Devgn then stick his neck and funnybone out with such a low-key film, cracking it with his casual presence and precise timing... full review

So-So, Indicine : ...The background noise, the dress, the makeup and the behind the scenes clips in the end - the movie in its entirety is too loud... full review

So-So, by Subhash K Jha, Now Running.com : ... So ok. This one doesn't leave you... er blue in the face. The comedy is purely situational and the style purely 'Rohit Shetty'. That means a bit of slapstick, a bit of that rapidly-moving tongue in the cheek, and a lot of Ajay Devgn. ... full review

So-So, by Ashok Nayak, Now Running.com : ...Ajay Devgan has the meatiest role and he is fantastic in the comic scenes. Johnny lever after a long time is fun to watch. ... full review

So-So, by Namrata Joshi, Outlook India : ... Both he and Dutt seem to be enjoying their comic turn which gives the film much of its madness and energy. ... full review

So-So, by Khalid Mohamed, Passion for Cinema : ...The wild variety of T-shirts convinces you to never dare to wear one in public, what with Popeye and op-art motifs.... full review

So-So, by Nikhat Kazmi, Times of India : ...t begins so sluggishly you are almost ready to write it... full review

Yay! Thumbs Up, by Hindilyrics4u.co.in : There is this slight comment on undying friendship and the extent to which the best of friends can g

Yay! Thumbs Up, by JJ : only rohit shetty movie i liked

So-So, by Hindilyrics4u.co.in : Nothing else is subtle about the rest of the show though. The acting is loud and the background musi

Dharam (Sanjay Dutt) and Veer (Fardeen Khan) are brothers. One is an extremely successful businessman and the other is a wannabe musician. Veer has a friend Prem (Ajay Devgan) who is living off him. They have to lie to get money out of Dharam. Of course, they end up in a muddle.

All the Best - Cast, crew, links

B. H. Harsh - treat for family? really? Somehow the innuendos and the whole theme of exchanged partners didn't entertain me. THe other reviews are out, they are reviewed by my guest reviewers.

Thanks and Happy Diwali!!!

Hello from Russia!
Can I quote a post in your blog with the link to you?

@B H Harsh you got that right. i really dont understand the entire genre. Also the thing is in this genre the gags are getting repetitive...

@Pondy yeah. the status to writing in mainstream Hindi films makes me cry sometimes...out of pain and frustration

Good review for this movie :D