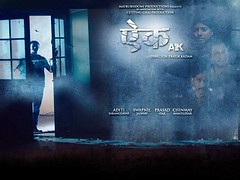 Intended to be a horror film, Aik is instead a confused muddle. The film is far from scary and is often plain boring. With neither the cast nor the content to make the film appealing to audiences in any way, Aik is one of those films that will probably not see another Friday.

Occasionally startling, mostly boring but never scary, this week’s Marathi release Aik, directed by Pratik Kadam, is a confused mess of a horror film. The hackneyed treatment of the horror scenes apart, the biggest problem that no one involved in its making seems to have any real idea of what their role in the filmmaking process is.

A young couple with a child moves into a spacious apartment in Mumbai that comes their way dirt-cheap. Without too much of a thought into why such a large house in Mumbai is being sold so cheap, they move in, but not before a few hints are provided about an existing otherworldly force in the house.

From here, the film shifts to the marital problems that the couple is facing. Before long, the film moves to an abandoned palace near Gujarat, where the husband’s TV channel is starting a first-of-its-kind live reality horror show.

The story of the film definitely had scope. For instance, one of the interesting things about this film is the nature of the ‘haunting’. The reason behind the haunting is unique, and makes logical sense (to the extent that a film about ghosts can) about why these particular people are being haunted.

However, it is hard to give the makers of the film too much credit beyond that, because of the manner in which the film has been treated. Starting from the look of the film to the choice of the lead cast and the techniques used to give the audience the chills, everything only gives the impression that a lot of confusion surrounded the making of the film.

Swapnil Jadhav and Aditi Sarangdhar, who play the husband and wife respectively, aren’t bad, but they just don’t look like they can carry a film all by themselves. It is hard to root for them not just because of the manner in which their characters are written, but also because they don’t really suit the characters much.

The screenplay meanders around too many issues and side characters, particularly during the reality show bits, distracting from what the main purpose of the film is. It takes too long to start getting scary, having already run out of steam by then.

The unconvincing content seems worse because of the technique. Shots are repeated with the hope that no one will notice, the cinematography and colour correction is inconsistent and substandard, and the production design is so poor that it often betrays the fact that the film was clearly being made on a really tight budget.

Aik can at best be likened to an ambitious student film. The makers of the film had a thought, and had the will to pull it through. What they didn’t have is the money and the expertise to make it worth the audience’s while.

Not Interested in Watching, by Does Tinnitus Miracle Work

Want to Watch, by nuratrim scam

So-So, by plus size dresses

the film is fantastic...horrorful...8/10 marks in a low budget.
i request you to make such finer film dubbed in hindi or in english sothat many ppl can watch such nice thrilling movie giving a nice moral that husband and wife should never and never fight when kids are present with them.