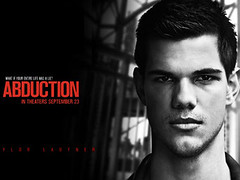 A few weeks ago, when we caught the trailer of Abduction on IMDB, a friend happened to bring something very relevant to my notice. In essence, Abduction looked like it was a more stylized, self-serious version of the forgettable Salman Khan Starrer Tumko Na Bhool Payenge (TNBP).

I wanted to disagree because secretly I found Taylor Lautner very umm...good looking. But I couldn’t – and this further reinforced after I watched the film.

Abduction is centered on a teenager, Nathan Harper (Lautner) who figures that he’s been lied to about his identity when he finds his baby picture on a missing person’s website. Further investigation into this takes him on an unexpected journey of (predictable) revelations and a web of complicated truths about his identity.

He has recurring dreams about his hidden identity (Reason for comparing to TNBP no 1), for which he seeks psychiatric help. Unfortunately that doesn’t stop him from being sunk into the messy whirlpool.

Of course, it all sorts itself out once Lautner decided to bare his shirt (reason no. 2) and take matters in his own hands. Alongside his high school crush, Karen Lowell (Lily Collins), he embarks upon a brave (allows the heroism) little expedition that makes for a repetitive, bordering on hilarious visual experience. The film faults fundamentally with its inability to evoke empathy for the lead teenager who is in such a mess.

Even if we manage to move above and beyond a relationship (or lack thereof) with the protagonist, what jars the most about Abduction is the fact that everybody in the film, most of all Director, John Singleton takes themselves much too seriously, and for no real reason, I deduced. Singleton’s 2 Fast 2 Furious was at least true to its genre - of being a fast paced, testosterone pumping, macho film.

Writer Shawn Christensen has written a script of convenience. Clues just happen to fall upon Nathan’s lap, he just happens to have exactly what he needs at any given moment of time – there’s no intellectual struggle on his part. The only struggle we see is with Lautner and his acting abilities. And we know he’s hot- but it can’t all be a breeze for him, can it?

The film looks its part though – with a monotone palate and of course, it helps to have a good looking protagonist, but on every other account, Abduction fails. You know a film is bad, if I recommend you watch the Twilight series instead.