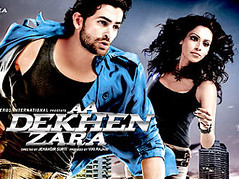 A smooth start with a rocky ending turns a romantic thriller into an unintentional comedy.

NOT A REVIEW - Just wondering how important it is for a Hindi film hero to dance...

I squirm everytime I see the Aa Dekhe Zaraa's trailor. Of course neither do thrillers require huge acting potential nor did Johnny Gaddar see Neil Nitin Mukesh get very emotive. But it worked as a thriller. And slotted Neil as a serious actor and certainly not the dance for masala kind of 'stars'.

It’s the Neil and thriller film combination that remind us of Johnny Gaddar while talking about Aa Dekhe Zara. Otherwise, there's no saying that the plot will be remotely as tight as Johnny Gaddar, right?

The concept of a camera making predictions vaguely reminds me of Mr. India and that genre of films. The kind in which a piece of equipment or gadget grants the protagonist/user a super-power. And then the film is about the use and abuse of the responsibility that the power brings along. That in combination with a thriller will be good fun if it doesn't have glaring loopholes.

What I like about just 2-3 people in the lead is that there is more room to develop character. Another interesting bit about characterization here is that the camera is treated as a character. That sounds extremely abstract and thus interesting. In an interview with The Hindu Neil says -

this camera is trying to make a contact with other characters in the film through this protagonist ... the actual narrative makes it all very simple for the audience to comprehend. interview with Bipasha

The heroine needed to be given a profession. It's only in one of the songs that I am shown turning discs and mixing music.

Oh well, hopefully her having a career will tell us something about her and the character will build upon that. All will be clear in just a couple days. Meanwhile, I'm relishing the fact that a song from the 80s still makes us tap our feet and sing it out loud...

The single most important thing for a thriller to work is a lack of loopholes. From a story that seems to be smart and appears to have it all sorted-out Aa Dekhen Zara becomes so full of holes that you have to sieve through them to reach the basic plot.

At half-point you know you are not looking at some great work of art but you are looking forward to some quick-paced slick piece of thrill. And then you hear the cookie crumble, but you try to ignore it. "It can't be that bad" you say. And then you see it crumble and know that the damage is irreparable. The inevitable, irrelevant, sleazy dance begins. Some villainous looking men ask a sexy lady to dance and she obliges. Except that there is nothing fearsome about those guys. This one song is indescribably out-of-place not only situation-wise but also out-of-synch with the general tone of the movie. Not to mention that it's hilarious to see Neil Nitin Mukesh call Bipasha Basu gori (fair skinned).

And yet before any of this comes along there are other things that are avoided that make the film a tad bit charming. With something as powerful as a piece of equipment that can make predictions, the protagonists don't aim at anything lofty or altruistic. So, you don't see the film taking its purpose too seriously. Unfortunately, it takes itself too lightly and the entire suspense, "damn! What next?" results in an anti-climatic molehill.

Like most departments, the dialogues too are inconsistent. The occasionally witty lines dive into blech and float back to average. Thankfully though, Neil Nitin Mukesh's narration of his character, Ray's thoughts were not as annoying as such spoon-feeding can usually be. I really don't know how they managed that because Neil didn't really need to emote, his voiceover left no doubt about what he was thinking.

That still doesn't mean that he didn't act well. There's something that his eyes do which could have conveyed the thought if they were allowed to. Bipasha Basu playing DJ, Simi...well, she does the little bit she can emote if the audience can be bothered to look above her neck. Hey! I'm not being voyeuristic, she was there for a purpose and I damn well appreciate it, right? Well, she does her usual excellent job of looking good. Other than that, her costumes looked like costumes and not dresses that a normal person would wear. The rest of the cast has done a hideously superficial job.

Earlier in the movie though, I found myself enjoying the pace. It doesn't stop at anything or for anyone. Aa Dekhen Zara smoothly flows from one incident into another, especially in the beginning. I especially enjoyed the pace of the romance between Ray and Simi. In fact, I enjoyed a romantic moment in cinema after a long, long time. Later, like the rest of the movie, the even pace too becomes jerky because of the jumps it feels obligated to take.

Oh, by the way, if you are looking to take away some cool action sequences at the very least - let me save you some time, money, and energy. There's none. Some light, nice build-up is what we have in the first half and a burst balloon in the second.

Thumbs up, by N K Deoshi, Apun Ka Choice : ...Aa Dekhen Zara is worth a dekko for the freshness of its theme.... full review

Thumbs up, by Kaveree Bamzai, india today : ...You might enjoy its quick pace and slick editing.... full review

Thumbs up, by Nikhat Kazmi, Times of India : ... It's a smart new concept, a snazzy coupling between Neil and Bipasha... full review

So-So, by Baradwaj Rangan, Blogical Conclusion, The New Sunday Express : ...the only aspect that renders this thriller halfway watchable is its breathless pace, accelerated by a score on steroids... full review

So-So, eTalkIndia : ...Cinematography is awesome.Concept is quite new , but every thing falls apart due to loosely bound script... full review

So-So, by Rachana, Glamsham.com : ...The slick thriller that starts off well fades away just after the first hour... full review

So-So, Movie Talkies : ...about halfway through, the film seems to run out of steam... full review

So-So, by Mayank Shekhar, Mumbai Mirror : ...The film itself is futuristic... full review

So-So, by Anupama Chopra, NDTV : ...Aa Dekhen Zara is painfully inconsistent and doesn’t stay true to even its own warped logic... full review

So-So, by Sampurn, real bollywoood : ...The film tries to give you something new... full review

So-So, by Taran Adarsh, SantaBanta.com : ...starts off with a lot of energy, but the fizz settles down faster than expected... full review

Thumbs down, Asian Age : ...Nothing really happens except for reels and reels of Neil boy’s desperate bid to preserve his late granddaddy’s camera.... full review

Thumbs down, by Anand Vaishnav, Buzz18 : ...you feel as though the director was making a pitch for the much talked about Race sequel.... full review

Thumbs down, by Goher Iqbal Punn, Radio Sargam : ...The concept of the film is without any doubt is interesting and much appealing.... full review

Thumbs down, by Raja Sen, Rediff : ...I'm not sure what director Jehangir Surti was trying to achieve with this film... full review

Thumbs down, by Banno, Upper Stall : ...I stick mental needles through my eyelids to keep them open.... full review

Want to Watch, by Margarita

Nay! Thumbs Down, by life quotes

Ray (Neil Nitin Mukesh) inherits a camera that can look into the future. What use is he going to put it to?